How the brain remembers amputated limbs – and continues to control them 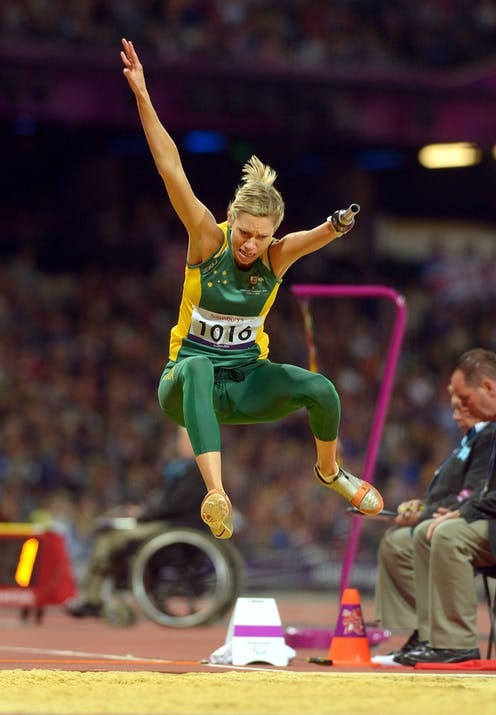 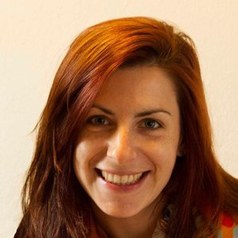 Most people who have lost a limb still feel its presence decades later. This phenomenon, dubbed “phantom limb”, has long been a mystery. But with new ultra-high resolution brain scanning, are now able to look inside the brains of amputees for previously hidden clues. We recently showed three striking cases of amputees with incredibly detailed maps representing all five missing fingers in their brains.

But why do these maps persist, despite decades without any input from the missing limb? In a new study, published in the journal eLife, we have now revealed that the amount a person can purposefully “move” their phantom limb is critical in determining how similar their brains’ hand maps are to those who have two hands. Our study shows that phantom limbs are not just an interesting oddity, but a phenomenon that can be harnessed to ask previously unanswered questions about the brain.

If a person is unfortunate enough to lose an arm, a lot is going to change. How do you put on socks? Or open a drink bottle? What might be less on a person’s mind (pardon the pun) is how losing an arm may change their brain.

There is some choice brain real estate that once controlled movement and sensation of the lost limb. So, what are those bits of brain getting up to now? This can be a surprisingly hard question to answer. Normally to explore the “arm” area of the brain – with brain imaging, for example – we would touch or move that arm. If that arm is missing, this poses a problem.

Through decades of mostly animal research, researchers have instead been touching and moving the remaining parts of the body to see if anything appears to be encroaching on this missing hand zone. This has shown us that if, for instance, a monkey loses a middle finger, the brain area (that once controlled the middle finger) is taken over almost instantly by the neighbouring index and ring fingers. It’s a territory invasion much like a bodily game of Risk.

This research painted a picture a brain in which old body maps seem to be wiped away and the valuable brain space redistributed to support limbs that remain But this turns out to be far from the whole story.

Since animals have a hard time telling us what they are feeling, it’s only through human research – much of it recent – that we have found out about the phantoms of lost body parts that haunt the brains of amputees, and the surprising insights they provide this provides to science. 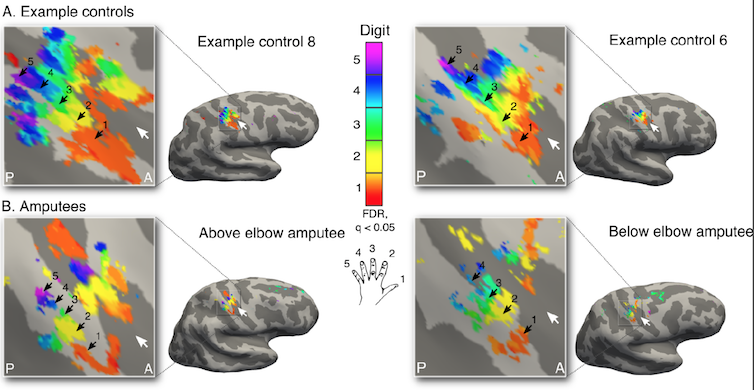 Brain imaging reveals detailed maps of the individual fingers of the hand in amputees (bottom) that are startling similar compared to the hand maps of the two-handed control participants (top). Author provided

Many people don’t realise that amputees not only can feel their phantom limbs – most also have good control over their movement. We previously showed that asking amputees to move their phantom fingers in the scanner results in beautiful maps of the individual (missing) fingers (see image above). The amputees in that study, however, were selected specifically because they had highly vivid phantoms. This lead us to wonder, is it these phantom sensations that keep the missing limb alive in the brain?

To answer this, we recently scanned a large group of amputees with varying levels of phantom sensation, phantom movement and phantom pain. We found that the extent to which a person could move their phantom fingers was the best indicator of how alike a two-handed person’s map they were.

Surprisingly, phantom movement was more important in predicting the organisation of these hand maps than the simple vividness of phantom sensations – how much they could feel their missing fingers. We were also surprised to find that these missing hand maps remain even in people who have little to no phantom sensations, indicating that these maps are incredibly stable once they have formed.

Finally, we wanted to know what is going on in the missing arm area of people born without a limb (congenital one-handers). Here, however, we had a problem: people born without limbs don’t typically experience phantom sensations (although this is a little bit contentious). This meant we couldn’t ask these participants to move their phantom in the scanner, as we did with the amputees.

Asking congenital one-handers to imagine moving their missing arm in the scanner produced very little hand-like activity (most of which we think can be related to visual aspects of our task). But to look deeper, we needed a new tactic.

When you move your right hand, this activates the right hand’s own hand map in the left (opposite) side of your brain. However, moving the right hand also causes activity changes that allow us to see the map of the unmoving left hand on the other side of the brain.

So by getting our one-handed participants to move their intact hand, we could capture an indirect look at the missing hand map. When amputees and two-handers moved their intact hand, we saw a very normal-looking hand map on the missing hand side. Participants born without a hand showed no such activity, giving us new confidence there really is little to no hand map there at all.

Phantom limbs capture our attention because they are fascinating and bizarre. But their scientific value is also becoming increasingly clear. Our research raises the question of whether people might be able to explicitly train their phantom hand to restore their finger maps to a more normal state. This may seem pointless, but scientists at Pitt University in the US are currently implanting electrodes into the missing finger maps of paralysed patients, allowing them to control and feel individual fingers of a robotic hand. It may soon be time for an entire phantom workout.