How Melania Trump reacted when asked about impeachment investigation vs. Donald Trump 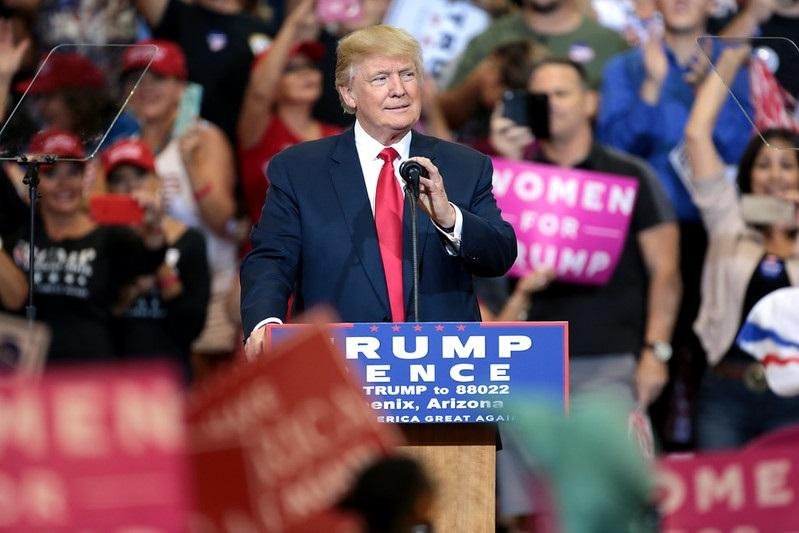 Donald Trump at a 2016 campaign rally in Phoenix, Arizona. | Photo by Gage Skidmore licensed under Creative Commons (https://creativecommons.org/licenses/by-sa/2.0/) via Flickr.com

There has been so much information and reactions made public at this point as the impeachment investigation against United States President Donald Trump. But apart from reactions from political analysts and other politicians, the people are likely most interested in hearing what First Lady Melania Trump has to say.

Melania Trump: Where is the First Lady amid Donald Trump’s possible impeachment

The impeachment process is now in full swing. However, the public has yet to hear any response or message of support from Mrs. Trump. Her silence on the subject became much more apparent during her solo trip to Capitol Hill to commemorate the passing of a law addressing the opioid crisis.

Reports have it that Mrs. Trump was asked how the impeachment investigations are affecting her and her family, but the First Lady purportedly did not answer.

Various reports have also pointed out Mrs. Trump’s silence over her husband’s huge political predicament despite having more public appearances over the last couple of months. While the First Lady maintains her silence amid her busy schedule, the President’s daughter, Ivanka Trump, has recently spoken out about the impeachment.

Ivanka told the Associated Press she supports her father’s statement that the investigation is a mere attempt of “overturning” the 2016 elections outcome. Though Ivanka thinks the whistleblower’s identity should not be a point of discussion, she insists they do not have the first-hand information on her father’s infamous phone call with Ukraine President Volodymyr Zelensky.

Media outlets might have another chance at getting a statement from Mrs. Trump about the impeachment process next month. White House has confirmed the Trumps’ attendance at an upcoming North Atlantic Treaty Organization (NATO) Leaders Meeting on Dec. 2 to 4. It will be held at Buckingham Palace while reception is also set and will be hosted by Queen Elizabeth II.