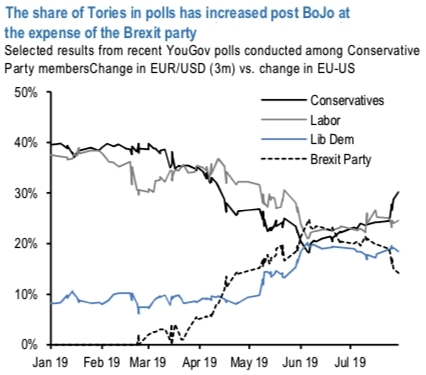 While yesterday’s UK labor report showed domestic inflationary pressures are rising, today’s consumer price inflation rate in the United Kingdom rose to 2.1 percent year-on-year in July 2019 from 2.0 percent in the previous month and above market expectations of 1.9 percent, as prices increased at a faster pace for recreation & culture and restaurants & hotels.

Those outturns would suggest that there is little need for BoE policymakers to consider an immediate change in interest rates (next meeting on 19th September).

We continue to think that GBP weakness has the potential to continue despite recent underperformance, as the new PM is likely to stick to his hard negotiating strategy, the government puts in more resources to prepare for a “no-deal” outcome and investor hedging likely continues.

GBP has slipped by more than 3.5% in the past month with a sizable part of the move delivered over the past week. The key driver has been an increasingly hardline by the new PM on Brexit negotiations as evident in ramping up of preparations for a possible “no-deal” outcome, Gove indicating that “no deal is now a very real prospect”, Boris Johnson’s office hinting that the next round of Brexit talks might not happen all and apparent insensitivity of the government to recent GBP weakening. The simultaneous increase in the share of polls in favor of the Tories has not helped matters, even if it was expected following May’s departure and has come at the expense of the Brexit party (refer above chart).

Despite the increase in Tories share in polls, the numbers are not yet at levels which would indicate a definitive majority (shares in polls exceeding 35-37% would be more favorable). With the vote split the way it is currently, it is less easy to predict seat distribution and hence the situation remains fluid. For markets, either outcome—an election of a Conservative party pushing uncompromising hard Brexit or the possibility of a Labour administration if Johnson’s strategy fails—presents an unfavorable outcome. The BoE with its shift to a neutral policy stance this week remains a sideshow for FX.

GBP is admittedly starting to screen cheap on some metrics, but with investors shorts still, 30% smaller than their extreme additional downside can’t be ruled out. However, the risk of whipsaw on unexpected political developments leads us to conclude it prudent to trim some bearish GBP exposure.

Our latest recommended GBP shorts were vs JPY and USD outright. We take profits on both and roll part profits into a limited downside GBPUSD put spread. This would still serve as a tail risk hedge if conditions deteriorate. Courtesy: JPM