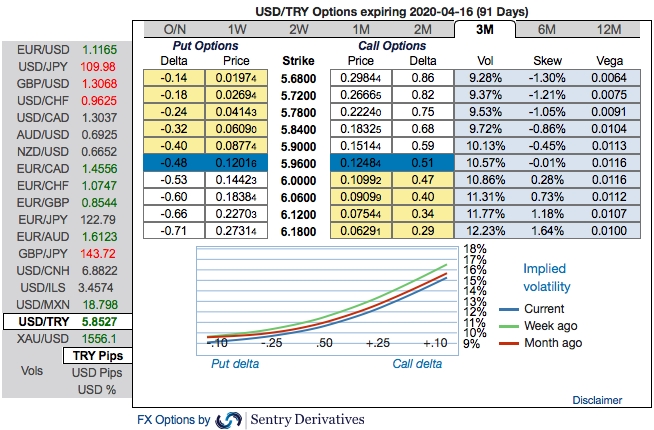 The Central Bank of Turkey slashed its one-week repo auction rate by another 75bps to 11.25 percent during its first policy meeting of 2020, defying market expectations of a 50bps cut. Policymakers have lowered rates for five consecutive times since July last year, bringing borrowing costs to the lowest level since May 2018, saying the inflation outlook continued to improve and inflation expectations sustained their wide-spread decline. The bank also said the current monetary policy stance remains consistent with the projected disinflation path.

There seemed to have a strong pressure from Turkish President Tayyip Erdogan on the central bank to continue with rate cuts until they have dropped to single-digit.

Nevertheless, the size of step today probably could not be as large as the 200bps implemented in December; this is because inflation has begun to re-accelerate and the real interest rate has already dropped to near-zero after today’s move, it will drop to negative.

Meanwhile, Turkey’s current-account deficit is re-emerging. Such trends are bringing to an end a honeymoon period when inflation was falling because of base-effects, the current-account was improving because of recession, and the lira was stable because of falling rates globally. Rather, latest Turkish data support the view of skeptics who predicted that economic imbalances could re-surface once the economy got a chance to stabilise from the 2018 lira crisis.

That is the most significant implication of the data: it is not about whether the real interest rate is marginally positive or negative depending on whether one uses one or another inflation series, it is that the economy’s structure and behaviour has not completely changed as policymakers were claiming.

There were some optimists in the market who were even suggesting that Erdogan’s view of lower interest rates leading to lower inflation, was being borne out by the data – this is despite abundant evidence that base-effects were responsible for the improvement. Since the latest data tell us that longstanding Turkish risks still persist, and meanwhile the real interest rate is going to negative, we should look for a sharp rise in USDTRY in coming months.

On hedging grounds, capitalizing on prevailing price dips and above driving forces, we already advocated 2m USDTRY debit call spreads with a view to arresting momentary downside risks and upside risks in the major trend. At spot reference: 5.8527 level, initiated 2m 5.50/6.24 call spreads at net debit. One achieve hedging objective as the deep in the money call option with a very strong delta will move in tandem with the underlying spikes.

It seems that hedgers of TRY are positioned for the upside risks on the above fundamental factors. The skewness 3m IVs are indicating upside risks, higher bids for OTM calls are hedging bias towards upside risks (refer above nutshell).

IVs of this underlying pair is also on the higher side, trending highest among the G20 FX space. Call options with a higher IVs cost more, because, increasing IV is conducive for the option holder, just for an intuition that the higher likelihood of the market ‘swinging’ in holder’s favour. Courtesy: Sentry & Commerzbank