FxWirePro: Spotlight on AUD’s Vols Divergence To EMFX and FVAs Ahead of RBA and Fed 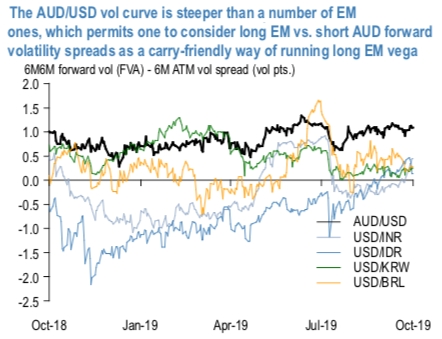 The Aussie has closed within a 0.6700 - 0.6900 range every day since late July. Iron ore prices are rolling over on patchy demand and resilient supply, while we believe the US and China still have major hurdles which will keep tariffs in place. Limiting downside though, we expect the Aussie central bank to hold steady into 2020.

The US Fed is scheduled for the monetary policy this week, it is a fait accompli for the market that the Fed will cut its key rate by 25bp to 1.50 - 1.75% today and that move is priced in.

We are acutely conscious though of the need for cost-of-carry mitigation on long EM vol positions to make them viable for macro portfolios. To us, this almost inevitably implies resorting to long EM vs. short DM vol spreads as the principal theta-survival tactic.

On this front, the steepness of the 6M – 1Y segment of the AUDUSD vol curve, and therefore the potential vol carry on offer from selling 6M6M forward volatility, stands out as an opportunity to subsidize the bleed on long EM vega positions (refer above chart). Anecdotally, the current market bid for 1Y AUDUSD vol likely stems from vega demand from cross-asset RV structures (short ASX vs. long AUD variance swap spreads have been popular this year).

But AUD is no longer the high-beta asset it once was, as interest rate differentials vs. US have turned negative, and the large pre-positioning in long AUD carry trades that had provided the fuel for 2007/’08’s catastrophic de-leveraging has now become history. Combined with sizeable speculative cash shorts and an option market heavily supplied with AUD put strikes from risk-reversal selling Australian exporter hedging flows, we are comfortable with the notion that any further declines in AUD from here, will remain relatively orderly, and that realized vol during risk-unfriendly spot declines will not explode in a way that undoes the purpose of using AUD for subsidizing the carry on EM vega longs.

In light of this benign currency-specific set-up, and given the context of the current low vol market, the 0.8-1.0 vol of positive slide on offer from selling 6M6M AUDUSD FVAs is an interesting alpha opportunity in its own right.

However given our broad defensive orientation anchored by end-of-cycle concerns, we agree to JP Morgan’s pairing AUD shorts with FVA longs in EM, preferably in high-yielders like INR and IDR that have known idiosyncratic pressure points (e.g. a negative feedback loop between growth and shadow banking credit stress in India) and that can prove rewarding to own in significant market stress. Courtesy: JPM