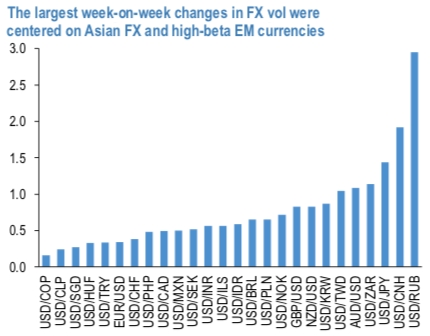 The latest tariff threat from Trump emphatically reinforces the perspective of dollar’s bullishness; the crucial difference for FX volatility is the potential for greater velocity and urgency to dollar rallies than might have been previously anticipated. The net result is a sharp re-pricing higher of front-end implied vols across the board, with the largest increases focused on Asian currencies in the eye of the storm and China-linked high-beta EMs such as ZAR (refer above chart).

Beyond the first-order push towards higher vol levels, re-emergence of trade tensions alters our post-FOMC views on FX vol in two subtle ways:

i) Narrow vs broad currency volatility: First, without the trade shock, Fed-driven dollar bullishness and the attendant moderate lift in USD-vol would have been more efficiently captured via long/short option RVs against other currencies where central bank narratives were stale or non-existent. In this respect, the gamma outperformance of antipodean currencies in H1 when the RBA and RBNZ were in motion provided a decent template to think about the FX vol impact of freshly minted central bank easing cycles, when markets are the most uncertain about the quantum and time distribution of prospective cuts.

However, such uncertainty is typically currency-specific and not global, hence vol alpha needs to be carefully chiseled out via RVs that isolate idiosyncratic interest rate noise rather than through blanket vol longs.

In contrast, tariff threats are a blunt instrument – a blanket vol generator that affects large swathes of the EM world, albeit with a tilt towards Asia that is the epicenter of stress.

ii). The diametrically opposite implication for JPY- and CHF-cross vol: One consequence of the post-FOMC contained dollar strength view without a material risk market fallout would have been a rise in USD- correlations as a result of across-the-board USD strength, including vs. JPY and CHF. If anything, the dollar could well have gained the most against those two alternative reserve currencies, since they were also the biggest beneficiaries of USD weakness after the dovish June FOMC. The result would have been meaningful vol underperformance from the likes of AUDJPY, which typically contain appreciable risk premium to begin with due to their tight correlation to, and popular usage as proxy hedges for, other assets such as equities. That view now needs a serious re-think, since stocks face potentially large downside from current levels if the 2Q’19 episode were to repeat. USD-correlations between most currencies are still expected to climb on broad dollar strength, but with the notable exceptions of JPY and CHF. Not only will JPY- nor CHF-crosses not soften in that scenario as initially thought, but will very likely outperform USD-vols as is customary during episodes of serious financial market stress. Courtesy: JPM