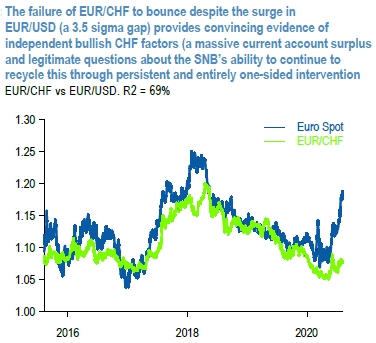 Negotiations on a new economic stimulus package in the USA are still at an impasse. Since Friday there are said to have been no more direct talks between Democrats and Republicans. The markets and the Dollar are still coping well with the stalemate, but this reduces the pressure for a quick compromise. However, the Fed is becoming increasingly impatient. Already yesterday Richmond Fed President Thomas Barkin stressed the importance of another fiscal stimulus package. Due to the increased number of infections, the pothole in which the US economy was previously stuck could turn into a sinkhole. Without additional fiscal stimulus, it could swallow the US economy. Three Fed central bankers have the opportunity today to use their speeches for similar warnings. If there is no movement in the negotiations soon, the Fed's concerns are quite likely to have an impact on the dollar sooner or later.

USDCHF has served us well as a proxy EURUSD long. But this is far from being the only reason to hold a CHF long. As the above chart demonstrates, EURCHF is now nearly seven cents too low given the surge in EURUSD, an undershoot that we take to be compelling evidence of the independently bullish factors that have boosted CHF, and will likely continue to do so.

In essence this is a current account disequilibrium on steroids, insofar as Switzerland found it almost impossible to recycle its 10% of GDP current account surplus even before the onset of global financial repression, hence the reliance on persistent SNB intervention to generate the necessary capital outflows. There is no definitive limit on the SNB’s ability to continue with this policy to blunt fundamentally justified CHF appreciation in this way.

Nevertheless, we suspect that an adverse finding by the UST about currency manipulation in its next report would increase pressure on the SNB to scale back its activities and permit rather more CHF appreciation. While such a finding is not necessarily guaranteed even if Switzerland does now satisfy the three objective criteria to identify manipulation criteria, we continue to regard the forthcoming report as an important asymmetric risk factor for CHF, one that is worth pre-positioning for.