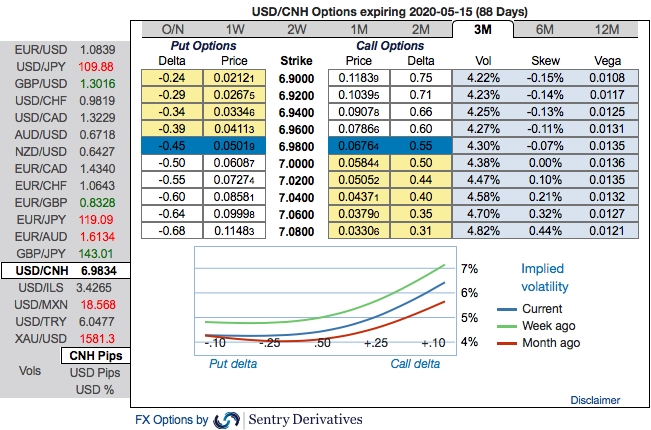 The growth engine appears to be started in China despite snail’s pace. Certainly, it will take some time for the economy to return to the normal track. In the meantime, the market has gradually priced in the possibility of a large fiscal stimulus in China, which makes sense as the Chinese government has a strong track record to fire up the economy amid difficult times. We are also in the same troop to see that a fiscal stimulus is already in the pipeline.

In the meantime, the Chinese central bank lowered the rates for one-year medium lending facility (MLF) by 10bps this morning, another move to ease the monetary policy stance.

In the FX space, the USDCNY still hovers slightly below the 7.00 handle and overall the USD-CNY becomes much less dynamic these days.

On a related note, China's property prices again illustrated a slowing momentum. While it does not bold well for the economy for the time being, it might also give the policymakers some reasons to relax the property policies in the aftermath of the virus.

For now, please be informed that USDCNH positively skewed IVs of 3m tenors still indicate the upside risks, they are still bids for OTM call strikes up to 7.16 levels.

Contemplating above factors, and organic depreciation pressures likely will take the pair back higher in 2H as domestic growth is expected to moderate and likelihood of further trade deals become difficult with the U.S. election cycle kicks in. Without any meaningful surprise to the scale of tariff rollback down the road, we struggle to see the case for the USDCNY to sustain notably lower than its current tariff neutral range at 6.95-7.20.

Hence, at this juncture (when spot reference: 6.9683 level), we upheld our shorts in CNH on hedging grounds via 5-month (6.90/7.15) debit call spread. If the scenario outlined above unfolds, we will re-assess our stance but at the moment there are no changes to our CNH recommendations. Courtesy: Sentry & JPM