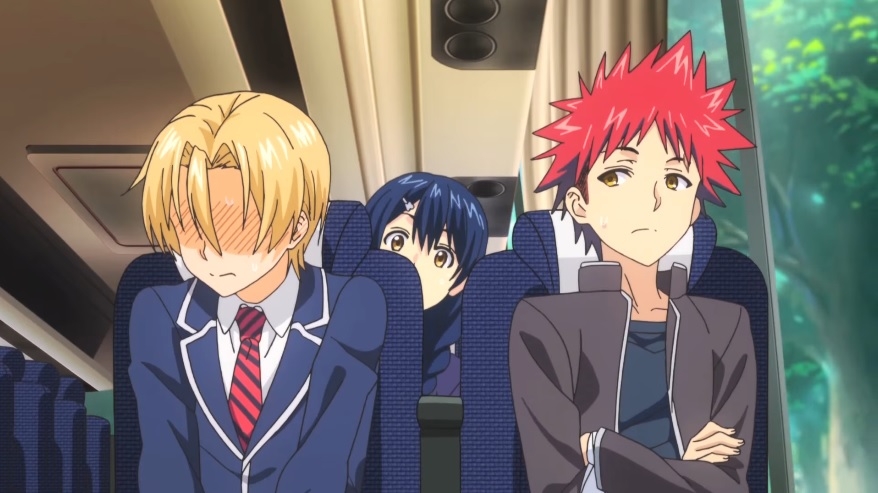 BLUE competition continues in “Food Wars” season 5 episode 6 and the protagonists are starting to fight in 1v1 cooking duels. The title for the next episode suggests Soma is going to face a Noir chef who uses a chainsaw as her main kitchen tool.

Fifth Plate’s next episode is titled “A Midsummer Christmas” that corresponds to a manga chapter where Soma competes with a Noir chef named Sarge. She dresses like a military officer and, just like other Noirs, her choice of cooking tool is called the Chainsaw Carving (C.C.) Knife.

In Sarge’s first duel for the Final Gate, she will go up against Soma with they have to prepare a cake that matches the theme of a midsummer Christmas. “Food Wars” season 5 episode 6 should demonstrate Sarge’s skills in using her C.C. Knife and other bizarre cooking tools such as a sledgehammer and even an explosive to prepare her dish, which was named in the manga as the Cluster Bomb Cake.

On the other hand, Soma’s main cooking tool in “Food Wars” season 5 episode 6 is an ice cream wooden spoon that will further annoy Sarge because she will see it as an insult. But Soma is not underestimating her and intends to use the wooden spoon to good use for his Christmas Log cake with Japanese Firework Balls, thus, addressing the midsummer Christmas theme.

Aside from the fierce cooking competition, “Food Wars” season 5 episode 6 is likely to include important flashbacks to when Soma was younger. The things he learned while working with his father at the Yukihira Diner will influence his concept of a midsummer Christmas cake, including a time when he had to prepare a dessert for a customer who cannot consume sugar for medical reasons. Anime fans could also get a glimpse of Sarge’s backstory and how she got acquainted with Asahi.

“Food Wars” season 5 episode 6 will be released on late Friday, Aug. 7. New episodes are available for fans outside Japan through a simulcast on Crunchyroll every Saturday at 12:30 a.m. PST.

“Food Wars” season 5 is the final series installment as it covers the manga’s final story arc titled after the BLUE competition. The Fifth Plate will reportedly have 12 episodes only.