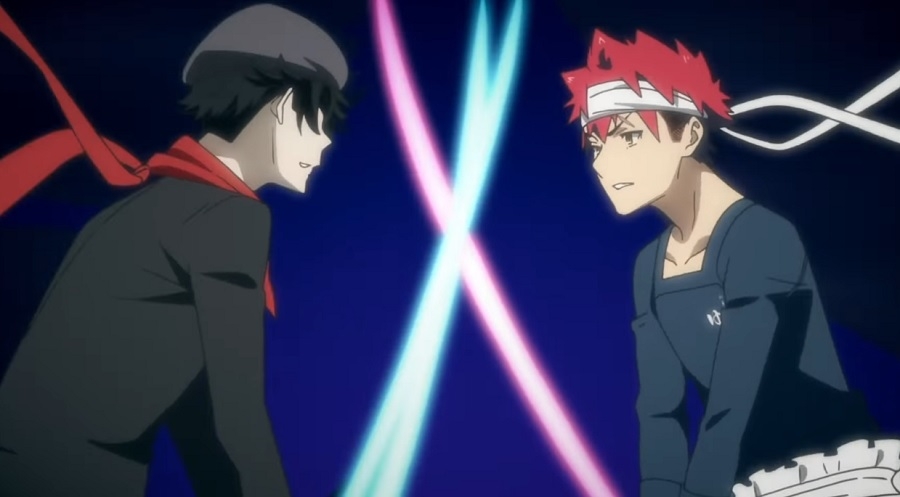 The Fifth Plate has so far introduced a sequence of events different from the manga, but the latest promo videos seem to suggest “Food Wars” season 5 episode 3 will introduce the real villains. If that would be the case, Erina could be in trouble as Suzuki kidnaps her for his big revelation.

Suzuki has been the one sketchy character in the Fifth Plate, so far. That was further confirmed when suddenly challenged Soma in a shokugeki where the wager is Erina. But Suzuki could do something much worse in “Food Wars” season 5 episode 3.

As mentioned, “Food Wars” season 5 is not strictly following the chronology in the manga. However, one of the scenes in the official opening theme shows Suzuki carrying an unconscious Erina. In the same scene, cryptic hooded figures are lined up behind Suzuki suggesting they are the other villains in the Fifth Plate.

This could be a foreshadowing that the anime will adapt the manga sequence where Suzuki and members of Les Cuisiniers Noirs (the Midnight Chefs) kidnapped Erina. “Food Wars” season 5 episode 3 is likely the installment where that will take place as it is titled “Noir.”

If “Food Wars” season 5 episode 3 will not stir away too much from the events in the manga, the kidnapping of Erina would lead to Suzuki’s ultimate challenge for the God Tongue. Suzuki will challenge Erina that if he defeats her at BLUE, she will have to marry him. The villain posing as a temp at Totsuki should also reveal his name soon, a piece of information that will shock both Erina and Soma as it will confirm Suzuki’s connection to Joichiro.

The release of “Food Wars” season 5 episode 3 has been delayed for more than two months since the series went on hiatus following the rise of COVID-19 cases in Japan in April. The Fifth Plate had a restart earlier this month, but it now appears that the show is back on its regular broadcast schedule.

With that, “Food Wars” season 5 episode 3 will be released on Friday, July 17, at 12:30 a.m. in Japan. Its simulcast on official streaming platforms should be available shortly after the said time.