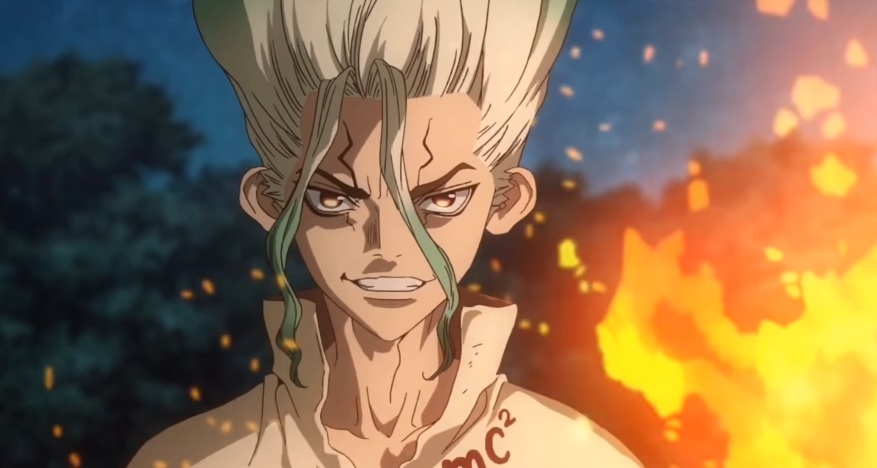 From a promo video of “Dr. Stone” season 1 | Photo via: AnimeTV / YouTube screenshot

With an imminent battle between the Kingdom of Science and Xeno’s group, a particular panel in the leaks suggest the latter may have an unexpected advantage. Xeno appears to be holding what looks like a Medusa.

One of the pages of the leaked “Dr. Stone” chapter 161 scans shows Xeno holding a stone that looks very similar to a Medusa. It is also known in the series as a Petrification Weapon and considered one of the most powerful objects a character could have. With the rivalry of the two science groups led by Senku and Xeno intensifying, learning that the latter possesses a Medusa is a game-changer.

However, upon reading the “Dr. Stone” chapter 161 leaks, some fans are wondering if what they saw means something else. Some of the suggestions include the supposed Medusa might not even be a real one and could be something Gen had been carrying exactly for this kind of situation.

Fans who have been longing to see a chapter with Gen will love “Dr. Stone” chapter 161 as several pages of it include an update on how he is doing. It can be recalled that he is currently held captive by Xeno. Some readers think Xeno's Medusa-looking stone could be fake. It is possible that Gen and Senku had crafted this plan a long time ago, and it is coming to fruition now that the Kingdom of Science is about to attack Xeno’s group.

Before “Dr. Stone” chapter 161, Senku was presumed dead by Xeno’s group after he was shot in the chest by Stanley. But it was implied that the enemies do not know yet about Senku’s real status, and the Kingdom of Science decided to use this to their advantage by attacking when the enemies least expect and when they are overconfident thinking Senku is dead.

“Dr. Stone” chapter 161 is included in the Weekly Shonen Jump lineup. Its physical copy is released every Monday in Japan. This explains why there is no English version of the manga leaks at this point.

The official English translation will be available digitally to other regions on the same day the physical copy is out in Japan on Monday, Aug. 10. “Dr. Stone” chapter 161 will be on the websites and mobile apps of Manga Plus and Viz’s Shonen Jump.