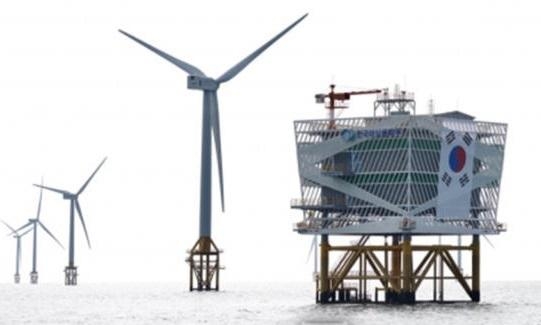 The 60 megawatts (MW) wind farm is located in the coastal waters of Buan, North Jeolla Province.

This is lower than the 7 meters per second minimum average standard for offshore wind power generation.

The 60 megawatts (MW) wind farm is located in the coastal waters of Buan, North Jeolla Province.

Over the past year, the wind farm's days with an average wind velocity of less than 4 m/s was 98, while the number of days with a utilization rate of below 10 percent was estimated at 130.

According to the Korea Energy Economics Institute, an offshore wind farm’s unit power generation cost is 275.59 won per kilowatt-hour (kWh), over five times higher than 54 won for nuclear.

An offshore wind farm’s construction cost is estimated at 5.8 billion won per MW, about twice more per MW cost of building a nuclear power plant.