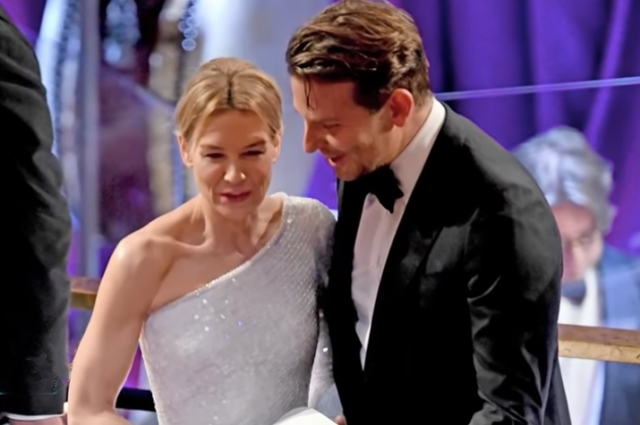 Bradley Cooper and Renée Zellweger are rumored to have had a secret tryst that took place just this month. It was said that after the Oscars last week, the two secretly got together and a sleepover occurred.

They are former lovers who dated for two years, from 2009 to 2011, and it was alleged that they just reconciled, but it was only a “friendly reunion.” They supposedly got together during the Academy Awards, and as proof, they were even photographed together as they chat.

As per New Zealand’s Woman’s Day, Bradley Cooper and Renee Zellweger had a run-in, and they immediately reconnected intimately. The source shared that the actress always thought of her ex-boyfriend as the one that got away, so she was really happy to see him at the Oscars, and it was a night where she was recognized as an actress too.

“Renée later told friends it was up there with winning the Oscar,” the insider supposedly told the magazine. “Talk about everything happening all at once! She has always thought of Bradley as the one that got away.”

The source went on to say say that the ex-couple may have called it quits, but through the years, they check on each other from time to time. It was said that Zellweger was actually nervous when she saw him up close again during the awards night.

“Renée and Bradley have really only spied each other sporadically over the past few years and she was understandably anxious about seeing him at the awards,” the so-called insider stated. “But Bradley went to say hello as soon as he could and told her he was so in awe of her performance in Judy that he’d watched it twice. Renée really appreciated his kindness and admitted later she had stomach flutters as soon as she saw him approach.”

Now, that meeting at the Oscars continued to the afterparty, and the source claimed that Bradley Cooper and Renee Zellweger ended up flirting throughout the night. What happened next is that the actress went with the actor to his Pacific Palisades mansion, and she was said to have stated until 4 a.m.

Gossip Cop debunked this report after checking with the actress rep to see if the claims are true. The publication revealed that Zellweger’s rep just laughed off the allegations because, in the first place, the two met at the Oscars, and they greeted each other. It is funny because those kinds of stories cropped up just based on Bradley and Renee’s short meeting at the event.