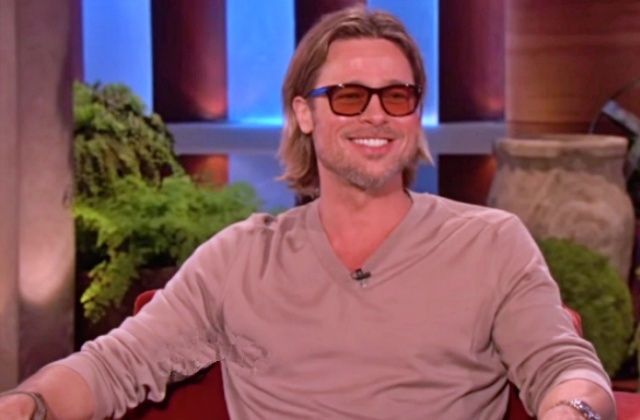 Brad Pitt has been described as the “saggiest man alive” by a tabloid. It was alleged that the actor’s love for fast food caused his derriere to drop.

Brad Pitt is said to be feasting in In-N-Out burger joint and stuffing himself with burger and fries. As a result, all the calories he just ingests have gone straight to his bottom and it started to sink. Now one of his most noticeable “assets” is ruined.

The Globe published an article claiming that Brad Pitt’s unhealthy diet is threatening his once beautiful posterior. He supposedly pigs out on fattening fast food items like green tea lattes, burgers and more so his body is losing its good shape due to the extra fats and calories.

“He’s never been one to hit the gym hard and while Brad still undeniably handsome, he’s starting to really sag in some areas - mainly his bottom,” the source told the tabloid. It’s dawned on him that he’s losing his figure and needs to do something about it - like squats and more weights for his upper body.”

The insider added that after the actor broke up with Angelina Jolie, he lost a lot of weight but then, he slowly gained them back. It was mentioned that Brad Pitt’s rumored girlfriend Alia Shawkat is also fond of junk food and this did not help because they’re likely to eat together most of the time.

“Brad spends a lot of his downtime chomping on double burgers, fries and shakes, the insider revealed. “Then slumming on the couch watching movies while crunching on M&M’s with his girlfriend.”

The source further claimed that the 56-year-old actor has a bad habit of gobbling anything down is within his grabbing reach. But fortunately, he now knows that he needs to stop.

In any case, Brad Pitt’s rep denied this story and clarified that the A-list star is not pigging out on fatty food. Moreover, Gossip Cop further dismissed the claim as the actor and Shawkat were never been romantically involved.

Thus, the mention of the actress in this report just proves even more that there is no truth in the story that was released by Globe. GC also pointed out that this tabloid is not really a reliable source of news so it can’t be trusted.