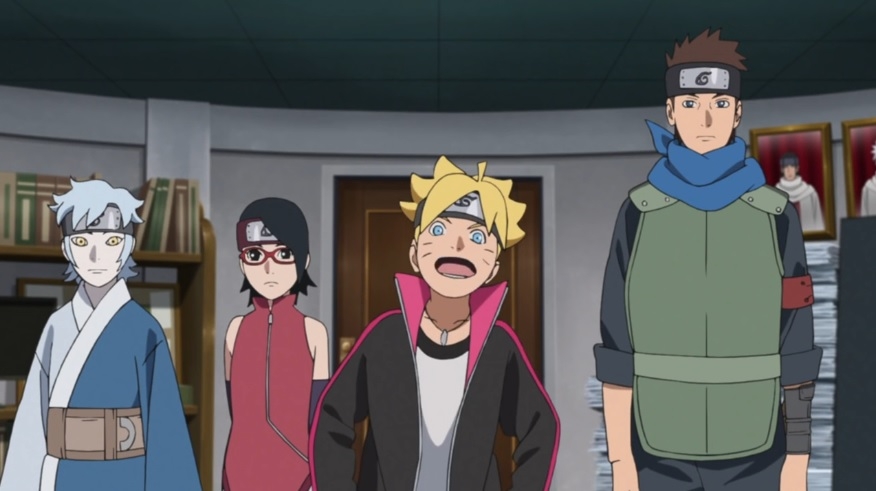 From the trailer of “Boruto - Naruto the Movie” | Photo credit: vizmedia / YouTube screenshot

The several previous chapters have all been entirely focused on the fight between the new Team 7 – composed of Sarada, Boruto, Mitsuki, and Kawaki – against Kara’s Inner named Boro. On the bright side, “Boruto” chapter 43 teasers have been hinting that this battle might conclude very soon in “a victory.”

When manga fans last saw the new Team 7, they have the advantage following Sarada’s Chidori attack on Boro. The member of Kara was not able to keep up with Sarada and the natural speed of the Chidori. However, the result of Sarada’s technique has yet to be revealed in “Boruto” chapter 43.

A teaser for the “Boruto” chapter 43 was included in a V Jump magazine advert, courtesy of OrganicDinosaur. Part of the translated text says, “Seize it! A Victory!!” The same promo material reminds fans that the main objective is to rescue Naruto.

It would not be surprising if Sarada’s attack extremely weakens Boro since the quickness of the Chidori prevented him from activating his regeneration abilities. The question for “Boruto” chapter 43 is if Boruto, Kawaki, and Mitsuki would need to perform other follow-through attacks to keep Boro knocked out as they attempt to complete the mission of rescuing Naruto.

An earlier teaser for “Boruto” chapter 43 also mentioned that the upcoming installment features the climax of the fight against Boro. It suggests that the battle would come to a close, possibly by the end of the chapter, and the success of the new Team 7 would dictate the fate of Naruto.

It can be recalled that Jigen trapped Naruto in a dome-shaped structure skewered in the enemy’s black spears. The Seventh Hokage did not have much chakra left when he was last shown in the manga, and Jigen was speaking in a way that Naruto is expected to die even before someone could save him. Aside from the result of the battle against Boro, Naruto’s condition is another thing that “Boruto” chapter 43 might resolve.

“Boruto” chapter 43 will be released online on Thursday, Feb. 20. Fans can access the manga for free through the websites of Manga Plus and Viz Media. Other official channels include the mobile apps of Manga Plus and Shonen Jump.