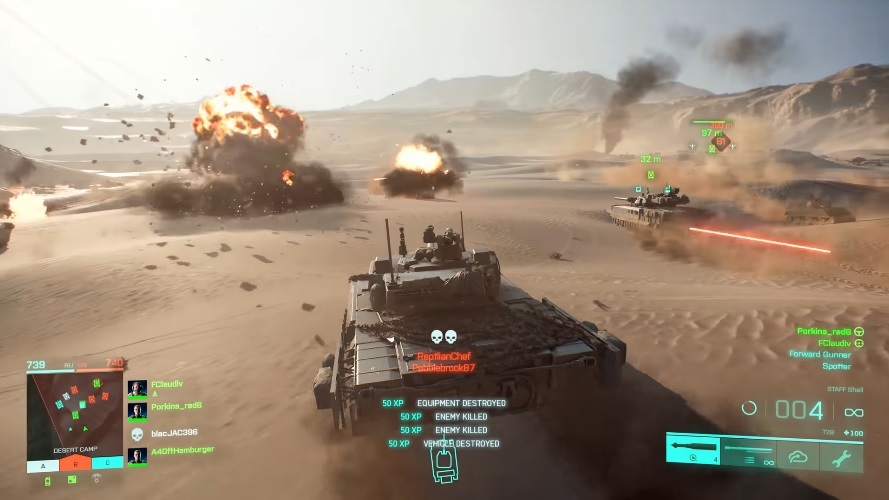 DICE will introduce adjustments to the way “Battlefield 2042” players gain Portal XP in Update 3.2, scheduled to go live on Thursday. The developer also revealed some early details for Update 3.3, including improvements planned for the Scoreboard.

The Battlefield Direct Communication page posted a series of tweets Wednesday, informing “Battlefield 2042” players of the significant changes coming to the game through Update 3.2 this week. About Portal XP, DICE is set to increase the XP cap to 300 that players can earn per minute in all Battlefield Portal modes. “Obtaining XP usually comes in bursts, and our intent for this change is to reduce the frequency of XP bursts being capped during gameplay,” the developer said.

Mastery and Weekly Missions progression will be tweaked in the “Battlefield 2042” Update 3.2, depending on “created experience types.” A chart that DICE provided indicates players will only earn “full” progression rewards for completing Featured Experiences, including full player XP, Mastery XP to unlock attachments, Ribbon XP, and access to Weekly Missions.

What you can earn in each experience will now be determined by which modifiers you use, and whether the Rules Editor, Damage/Health modifiers, or AI are enabled pic.twitter.com/oYIGq7N3bM

These changes are included in the “Battlefield 2042” Update 3.2 that will go live on Thursday, Jan. 20, at 8 a.m. UTC / 3 a.m. ET. As mentioned, DICE also revealed early details about the changes coming in Update 3.3 that includes the highly requested improvements to Scoreboard.

Shortly after “Battlefield 2042” became available in early access, the absence of the classic Scoreboard was one of the changes that did not go unnoticed, especially among long-time fans of the franchise. Luckily, DICE listened to players’ feedback on the matter and promised that a “refreshed Scoreboard” would be released in a future update.

In Update 3.3 we will refresh our existing Scoreboard UI with a new panel that showcases how players are stacking up across the server

Here’s your first look at our Work in Progress ???? pic.twitter.com/kmRTdl2WUx

An early look into the overhauled “Battlefield 2042” Scoreboard UI shows it will feature almost all necessary details so players can gauge how they or their squad is performing “across the server.” The Scoreboard will list all players and AI soldiers, along with a tally of their score, kills, assists revives, captures, and defenses. On the left side of the Scoreboard, players will find a match overview panel, their player information, and a summary of their Ribbon progression.

Players will have to wait a few more weeks for the Scoreboard, though. It will be included in the “Battlefield 2042” Update 3.3, which DICE says will be released “in mid to late February.”