U.S. Leading Economic Index likely to have dropped in December

Singaporean inflation likely remained stable in December, expected to accelerate in months ahead

Canada’s retail sales likely to have rebounded in November

Philippine GDP growth likely to have accelerated in Q4 2019 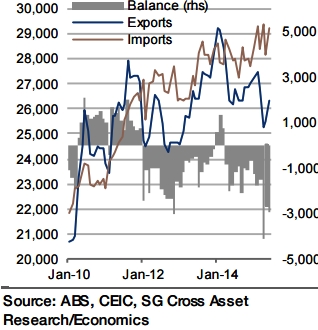 According to the official advanced estimate, imports were practically unchanged in July from June (0.2% mom), meaning that they remained at a high level, and were up by around 4.5% yoy. That said, all of this gain, and more, can be explained by the exchange rate, which in trade-weighted terms was down 13.5% yoy in July.

The volume of imports was estimated about flat over the past year, with the difference explained by weakness in commodity prices, specifically oil, of which Australia is a net importer. Exports, meanwhile, are expected to have continued their recovery after the 8.1% decline they suffered in March/April, but faced a serious headwind in July as the price of iron ore plummeted 17% from June (Port of Qingdao).

"Still, China's July figures for imports from Australia jumped to -4.5% yoy from - 26.5% in June, a move that can only partly be explained by a base effect. Overall, a muted 0.5% increase is expected in exports. As a consequence, the trade deficit should only improve fractionally", says Societe Generale.