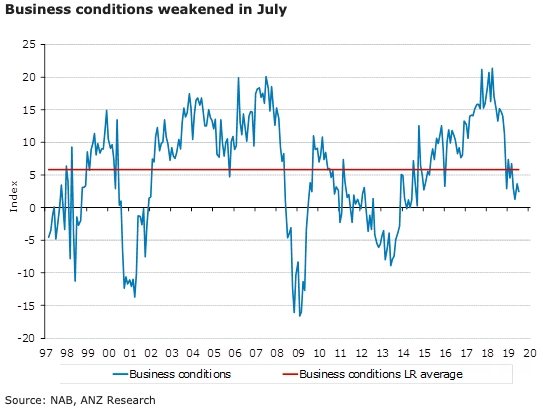 Australia’s business conditions deteriorated further below their long-run average in July. Although confidence improved slightly, it also remains below average. The jump in capacity utilisation and the employment index in June were reversed in July; these indicators are again consistent with the profitability index in pointing to slower employment growth and a higher unemployment rate (to be released Thursday), according to the latest report from ANZ Research.

Business conditions weakened slightly to 2.4 in July from 3.6 in June. After reaching a seven-month high in June, capacity utilisation fell back down to 80.9 percent, and the employment index fell below zero for the second time in four months.

Although there was some improvement in profitability and forward orders, they remain very weak, while trading and exports were also down. Labour cost growth moderated, but growth in purchase costs accelerated.

Business conditions deteriorated in all states aside from Western Australia, where conditions rose by 11.6 points to an 11-month high. Tasmania saw the largest monthly fall (-24.0 points) to its lowest level in six years.

Smaller declines were recorded in Victoria (-2.6 points), New South Wales (-1.7), Queensland (-1.5) and South Australia (-1.1). Average conditions in all states over the past three months are now below their long-run average.

Business conditions in construction collapsed in July, down 19.0 points from the eight-month high in June. Despite the prospect of tax cuts boosting household spending in H2 2019, retail conditions fell 10.6 points to a historical low of -31.9.

"Labour cost growth also moderated and we could see softer wage growth in Q2 (to be released Wednesday). No sign of a pick-up in the labour market or broader economy in the near-term," the report further commented.