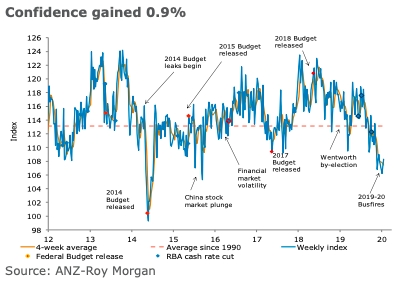 Australia’s ANZ-Roy Morgan consumer confidence continued with its forward march, gaining 0.9 percent last week. This takes it back to where it was in mid-December. The financial and economic sub-indices were mixed, while the ‘Time to buy a household item’ strengthened solidly.

‘Time to buy a major household item’ was up 4.7 percent, to its highest level since October. Four-week moving average of ‘inflation expectations’ was stable at 3.9 percent. However, the weekly reading was back above 4 percent after two weeks of being below.

"The gain in consumer confidence seen for the second straight week was encouraging, considering the weakness seen in the first reading of the current year. Overall sentiment remains well below average and quite some way below where it was before the RBA started easing in 2019, however. Some welcome rain during the week may have contributed to the overall rise in sentiment, along with some reasonable local data and the signing of the US-China trade deal Phase One. The attainment of a new record for the local share market could also have played a role. The domestic focus this week will be very much on the employment report. A soft result may dampen sentiment somewhat," said David Plank, ANZ Head of Australian Economics.