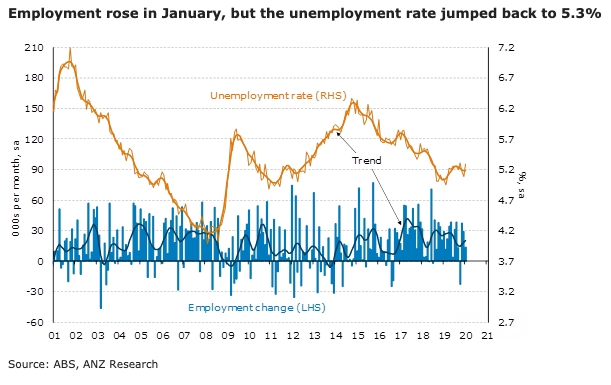 In a reversal of December’s move, Australia’s unemployment rate ticked back up to 5.3 percent in January, while employment rose modestly. The underutilisation rate jumped to a 19-month high. Alongside this, the participation rate edged back to 66.1 percent, just shy of the record high of 66.2 percent recorded in August last year.

The RBA has been clear in its focus on the labour market as a key barometer of the health of the economy. It would be disappointed by the lift in the unemployment rate in January, but would likely characterise it as broadly stable at 5¼ percent,

After a strong 28.7k rise in December, employment rose by a more moderate 13.5k in January. This was stronger than our own forecast for a fall of 5k, but broadly in line with market expectations. Full-time jobs (+46k) drove the gains in January, while part-time jobs fell 33k. Aggregate hours worked actually fell 0.4 percent in the month.

Despite the rise in employment, the unemployment rate rose from 5.1 percent to 5.3 percent. Underemployment also rose, up from 8.3 percent to 8.6 percent, lifting the underutilisation rate to 13.9 percent, the highest rate since June 2018.

The ABS reported that, “there was no notable impact on Labour Force statistics from recent bushfires”.

"Leading labour market indicators continue to suggest a deterioration in unemployment over coming months. In our view, a further lift in the unemployment rate will be enough to push the RBA over the line for another rate cut, most likely in Q2," ANZ Research commented in its latest report.