As the coal industry shrinks, miners deserve a just transition – here's what it should include 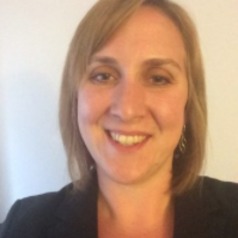 Murray Energy, one of the biggest private U.S. coal companies, has become the fifth coal company to file for bankruptcy in 2019. Union leaders and many elected officials worry that in addition to the 7,000 miners on Murray’s payroll, this step could threaten the solvency of the United Mine Workers of America pension fund, which supports over 100,000 retired miners and fully vested workers.

Whether people support or oppose the Trump administration’s efforts to prop up the coal industry, one point of agreement is that shifting from coal to cleaner fuels threatens struggling coal-dependent communities. Murray Energy’s bankruptcy is the latest reminder that it is past time to discuss a just transition for coal miners.

My legal scholarship examines environmental decision-making processes, with a focus on law and the urban-rural divide. In my recent research, I’ve dug into the origin and meaning of the idea of a just transition for workers.

My findings suggest that there is a strong ethical case for pursuing just transitions through policy. The challenge is to ensure that these policies nurture programs and institutions with lasting effects, rather than merely offering short-term band-aids.

More than half of the U.S. coal mines operating in 2008 have closed. EIA

What is a just transition?

There is no single definition of a just transition, but in the coal context it generally means finding alternative ways to support struggling communities that are losing their traditional livelihoods.

The concept was popularized in the 1970s by progressive labor activist Tony Mazzocchi, who worked in the auto, steel and construction industries before becoming an organizer. He believed that workers who had contributed to the public welfare through hazardous work deserved help in transitioning away from their difficult jobs. He first called for “full income and benefits for life” for such workers, but eventually changed his demand to four years of income and education benefits. Even then, his efforts met substantial opposition.

Mazzochi had ties to labor and the environmental movements, and his activism blended these concerns. Today scholars are embracing the idea that government should consider the economic impacts of transitions such as the shift to low-carbon fuels, especially when workers are displaced by public initiatives.

In my view, it’s unfortunate that it has taken so long for mainstream attention to focus on the fate of coal workers. For communities dependent on fossil fuels, particularly in regions like Appalachia with few other major industries, today’s job losses are just the latest phase of a long decline.

There is no road map for transitioning communities away from coal, but there are lessons from history. For example, American workers faced losses from international competition when the U.S. joined liberalized trade agreements in the second half of the 20th century.

In response, Congress passed legislation in 1974 that established the Trade Adjustment Assistance Program, which still operates today. It provides aid primarily to factory workers who can show that they have lost jobs or wages because of increased international competition. Eligible workers petition the U.S. Department of Labor for benefits administered through state agencies, including cash payments, retraining and assistance with relocation and job searches.

However, research shows that even with this support, affected workers were substantially worse off than they had been before the shift in trade policy. Scholars have criticized trade adjustment programs as an ineffective band-aid. In 2008 one of the program’s directors called it “too little assistance too late to those in need.”

Funding for environmental cleanup and business development can help Appalachian communities diversify away from coal.

Another example, the Clinton administration’s 1994 Northwest Forest Plan, was developed in connection with the decision to provide federal protection for the Northern spotted owl. Officials recognized that restrictions on logging would hurt the Pacific Northwest timber industry, which was already declining.

The plan provided direct federal subsidies to traditional timber counties to offset logging reductions on public lands. However, these payments have been declining since 2006, contributing to a fiscal crunch in rural Oregon. Local opposition to tax increases, which could support local government services and community planning, hasn’t helped.

Another initiative, the Tobacco Transition Payment Program, achieved more mixed results. In 1998 the four largest U.S. tobacco companies executed a major legal settlement with states suing them to recover tobacco-related health costs. The agreement required tobacco companies to provide billions of dollars in economic assistance to farmers to ease their transition away from growing tobacco.

Each participating farmer received an average of US$17,000 through the program, which ran from 2005 to 2014. The top 10% of recipients received 75% of the payments. Some assessments concluded that these cash injections boosted struggling rural communities. But farmers arguably have more autonomy than many other kinds of workers, since they can opt to grow different crops, so this example may have limited relevance for coal miners. 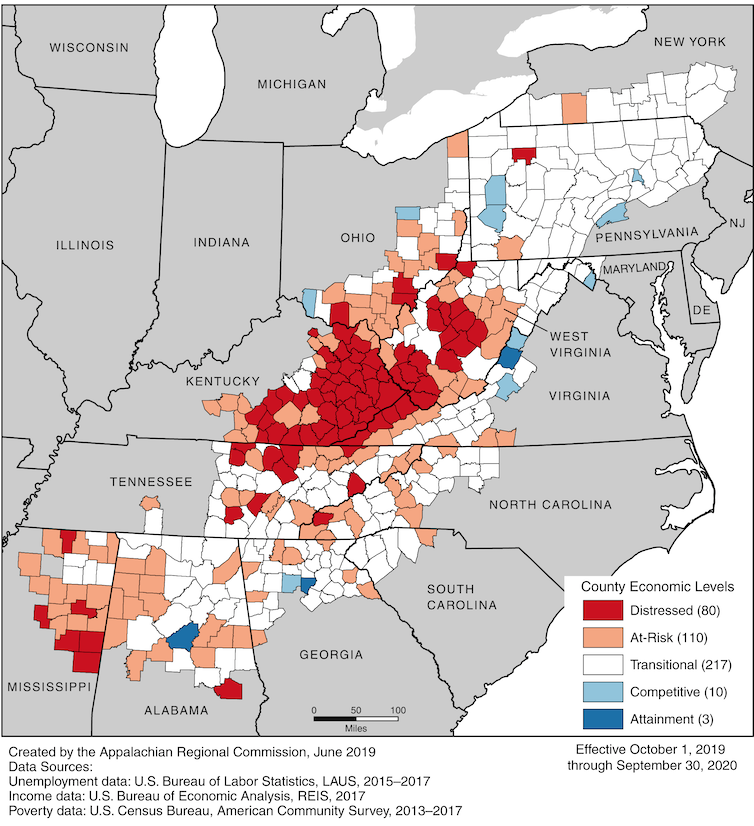 From 2015 through 2019 the Appalachian Regional Commission, an economic development agency supported by federal, state and local governments, has invested over $190 million in 239 projects across Appalachia. Although President Trump often calls himself a friend to coal miners, his first budget request proposed terminating the commission. Congressional supporters restored its funding.

It is popular for commentators to propose initiatives such as retraining coal workers for solar or natural gas jobs. In my view, this approach is simplistic: A just transition should focus on sustainably rebuilding regional economies, and should be informed by input from people who are affected.

Subsidies to local governments and benefits for individuals are a start, but should be better funded and implemented than trade adjustment assistance. They should build local institutions, such as schools and planning agencies, that can contribute to sustainable economic diversification – something the Northwest Forest Plan failed to do. And they should distribute benefits more equitably than the compensation program for tobacco farmers.

Along with job retraining programs, POWER is funding infrastructure development, public services and new educational institutions. But a just transition will require substantial resources and effort. It remains to be seen whether federal efforts will rise to the challenge.