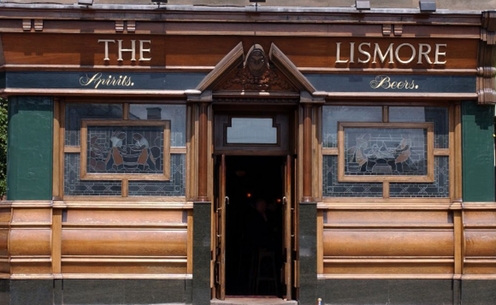 The Lismore is named after a Scottish island where the inhabitants were forcibly evicted during the Highland Clearances. Author provided 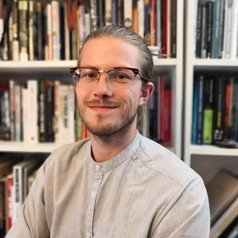 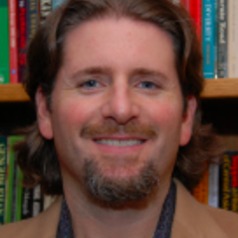 By Rhys Crilley, Robert A Saunders

If you wanted to see international politics in action, where would you go? Maybe the UN headquarters in New York to see diplomats debating resolutions of global import? Or drop in on one of the world’s many financial hubs, where trading shapes international markets and determines the success or failure of nations. But you probably wouldn’t visit a toilet in a Glasgow pub, would you?

Our research analyses the political significance of the urinal in the Lismore – a traditional Scottish pub in the Partick area of Glasgow – and argues that mundane spaces like this are important for understanding contemporary international politics.

In January 2018, a Canadian visitor to The Lismore tweeted a picture of a plaque that sits above the urinal in the male toilet, adding in colourful language that the Scots don’t mess around when it comes to calling things out. The tweet went viral, and was featured in local and national press.

“Brutal reason this pub really wants you to make use of their urinals”, read one headline.

That reason is the Lismore’s urinal is dedicated to three perpetrators of the Highland Clearances – the brutal sweeping of crofters from the land to make way for sheep farming in the 18th and 19th centuries – a series of events often claimed to be Britain’s first act of ethnic cleansing.

Pissing on the past

In the Lismore, male patrons are invited to “pay their respects” to those responsible for the Highland Clearances by urinating beneath plaques featuring the names of three agents – George Granville (the infamous Duke of Sutherland), Patrick Sellar and Colonel Fell – all key figures in the forced eviction of Highlanders from 1750 to the mid-1800s.

Here, urination is a political “bodily statement” where the urinator expresses their power over others. The Lismore’s urinal is a site where people can engage in a form of everyday resistance to British imperialism by pissing, literally, on the past.

The urinal informs and educates male visitors about the Highland Clearances, and depicts the perpetrators as “cruel”, “cold-hearted” “ruthless” evil-doers who acted “callously” and “brutally” in order to “decimate” Highland communities and the “indigenous population” of Scotland. Explaining the Highland Clearances in this way and inviting visitors to piss on the memories of these men, serves to give meaning to the Clearances, Scotland’s history and contemporary Scottish identity.

Peeing on the plaque allows visitors to participate in a form of resistance that celebrates Scottish identity while standing against the imperialism and oppression of historic British figures. As the manager of the Lismore told us, many patrons and tourists come specially to see the urinal, finding it humorous and enjoying the idea of “pissing on these evil men”.

Sometimes the urinal provokes anger. It has been daubed with graffiti – “whinging Scottish” – and an Englishman who’d had a few too many threatened to smash it. Whether celebrated or derided, the Lismore’s urinal highlights how everyday spaces and experiences shape people’s understanding of international politics.

The politicising of toilets

In 2016, a Dublin pub decorated a urinal with an image of Donald Trump, and so too have pubs in Nottingham and London. Urinal disinfectant cakes featuring Trump’s face are also now available for anyone who is “sick of seeing women, African Americans, Latinos, Muslims, LGBTQ people, the free press, reality, ethics, and the rest of the world shit on by Donald Trump”. According to the company that makes them, it’s now possible to “stand up and piss for what’s right” and “make urinals great again”. 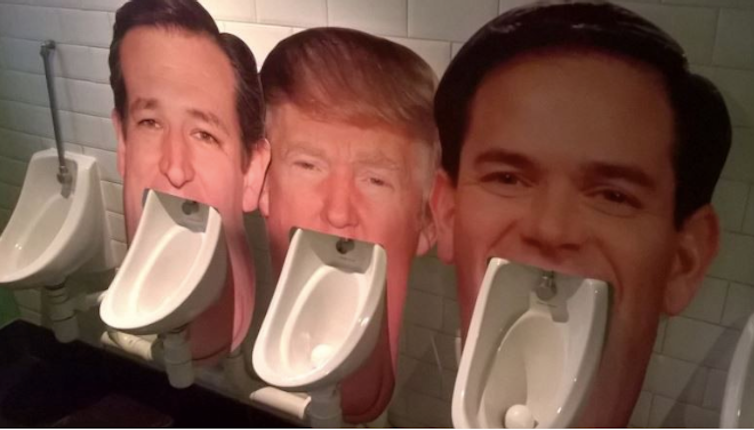 The urinals at the Three Stags pub in London’s Kennington in the run up to the 2016 US election. @thethreestags

While the act of urinating on an effigy of Donald Trump or the perpetrators of the Highland Clearances may be humorous, it is bound up with power, resistance and political identity. Other recent events also highlight how international politics plays out in the mundane, everyday space of toilets and bathrooms.

In 2016, the state of North Carolina made it illegal for people to use any toilet other than those assigned for use by the sex they were assigned at birth. Although since repealed, other conservative states across the US are attempting to introduce “bathroom bills” that discriminate against transgender and intersex people.

The Scottish government’s ongoing review of the Gender Recognition Act has also brought bathroom politics to the fore. Some politicians and pundits have suggested that allowing transwomen to use women’s toilets threatens the safety of women. But research shows that places with trans-inclusive bathrooms have no recorded instances of harassment or assault from transgender people.

Scottish groups which protect women’s rights – such as Women’s Aid and Rape Crisis Scotland – advocate for trans-inclusive policies and access to services (and bathrooms) because their experience and evidence shows that trans rights do not contradict or pose a threat to women’s rights. 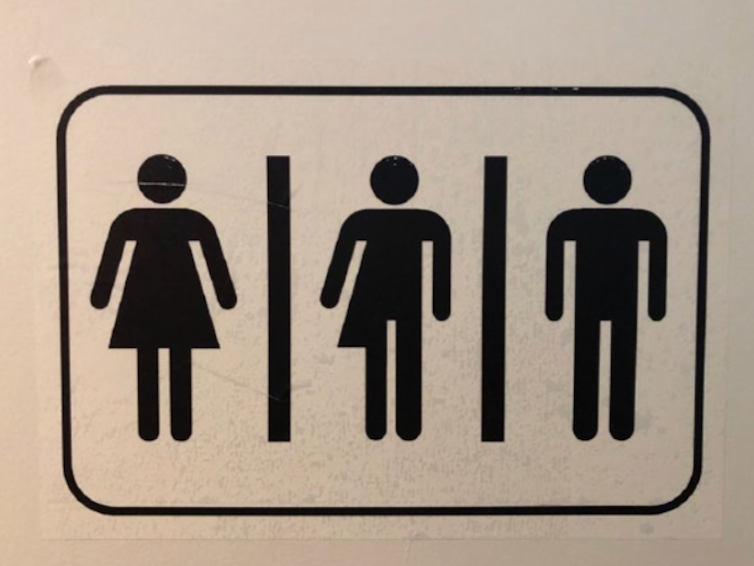 The Lismore urinal, the Donald Trump urinal cakes and the discrimination that transgender people can face when visiting the bathroom demonstrate that international politics take place through “mundane practices… [and in] the most intimate spaces”.

As the feminist Cynthia Enloe reminds us, if we want to understand the world around us we need to be curious about these things, and we need to recognise that even bathrooms, toilets and urinals can, and do, have political significance.