A surprisingly big black hole might have swallowed a star from the inside out, and scientists are baffled 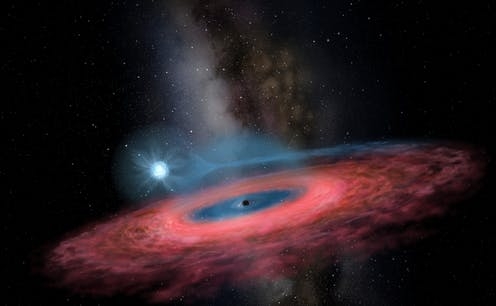 A recently discovered black hole -- found by the way it makes a nearby star wobble -- is hard to square with our understanding of how these dark cosmic objects form. NAOC, Chinese Academy of Sciences 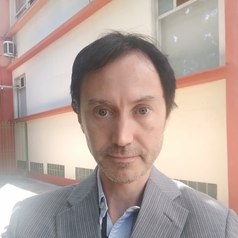 About 15,000 light years away, in a distant spiral arm of the Milky Way, there is a black hole about 70 times as heavy as the Sun.

This is very surprising for astronomers like me. The black hole seems too big to be the product of a single star collapsing, which poses questions for our theories of how black holes form.

Our team, led by Professor Jifeng Liu at the National Astronomical Observatories, Chinese Academy of Sciences, has dubbed the mysterious object LB-1.

What’s normal for a black hole?

Astronomers estimate that our galaxy alone contains about 100 million black holes, created when massive stars have collapsed over the past 13 billion years.

Most of them are inactive and invisible. A relatively small number are sucking in gas from a companion star in orbit around them. This gas releases energy in the form of radiation we can see with telescopes (mostly X-rays), often accompanied by winds and jets.

Until a few years ago, the only way to spot a potential black hole was to look for these X-rays, coming from a bright point-like source.

About two dozen black holes in our galaxy have been identified and measured with this method. They are different sizes, but all between about five and 20 times as heavy as the Sun.

We generally assumed this was the typical mass of all the black hole population in the Milky Way. However, this may be incorrect; active black holes may not be representative of the whole population. 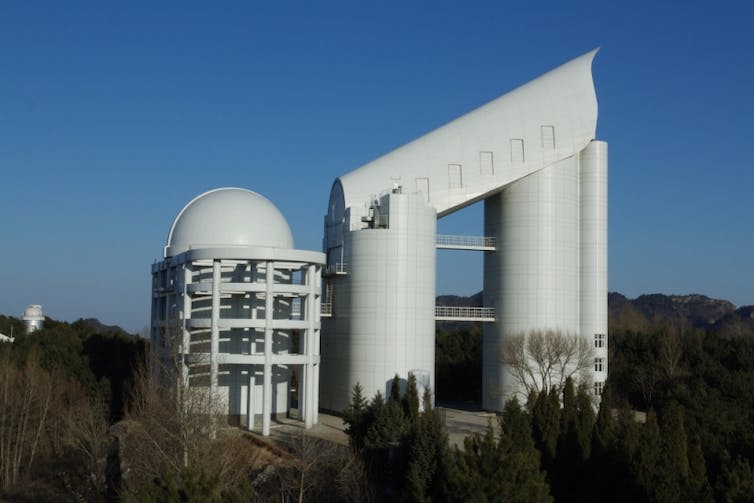 The unusual black hole was spotted using the LAMOST telescope at Xinglong Observatory in China. NAOC, Chinese Academy of Sciences

For our black hole search, we used a different technique.

We surveyed the sky with the Large sky Area Multi-Object fibre Spectroscopic Telescope (LAMOST) in north-east China, looking for bright stars that move around an invisible object. This let us detect the gravitational effect of the black hole, regardless of whether any gas moves from the star to its dark companion.

This technique was proposed by the British astronomer John Michell in 1783, when he first suggested the existence of dark, compact stars orbiting in a binary system with a normal star.

However, it has become practically feasible only with the recent development of large telescopes which let astronomers monitor the motion of thousands of stars at once.

John Michell (1724–1793) was the first scientist to predict the existence of compact stars from which light cannot escape. In 1783 he explained how to find them. Public domain / Philosophical Transactions of the Royal Society of London

How we spotted LB-1

LB-1 is the first major result of our search with LAMOST. We saw a star eight times bigger than the Sun, orbiting a dark companion about 70 times as heavy as the Sun. Each orbit took 79 days, and the pair are about one and a half times as far away from each other as Earth and the Sun.

We measured the star’s motion by slight changes in the frequency of the light we detected coming from it, caused by a Doppler shift as the star was moving towards Earth and away from it at different times in its orbit.

We also did the same for a faint glow coming from hydrogen gas around the black hole itself.

Where did it come from?

How was LB-1 formed? It is unlikely that it came from the collapse of a single massive star: we think that any big star would lose more mass via stellar winds before it collapsed into a black hole.

One possibility is that two smaller black holes may have formed independently from two stars and then merged (or they may still be orbiting each other).

Another more plausible scenario is that one “ordinary” stellar black hole became engulfed by a massive companion star. The black hole would then swallow most of the host star like a wasp larva inside a caterpillar.

The discovery of LB-1 fits nicely with recent results from the LIGO-Virgo gravitational wave detectors, which catch the ripples in spacetime caused when stellar black holes in distant galaxies collide.

The black holes involved in such collisions are also significantly heavier (up to about 50 solar masses) than the sample of active black holes in the Milky Way. Our direct sighting of LB-1 proves that these overweight stellar black holes also exist in our galaxy. 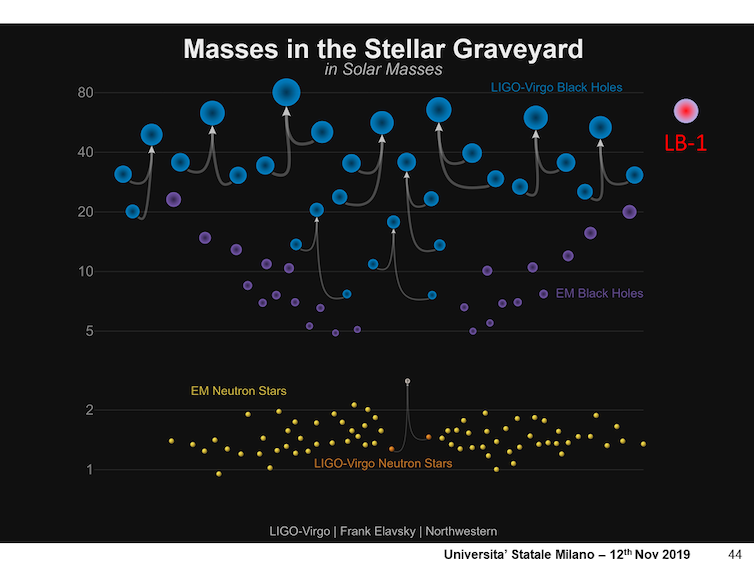 Neutron stars (yellow) are as heavy as 1 to 2 Suns. Black holes discovered from X-ray radiation (purple) have masses between 5 and 20 Suns. Colliding black holes detected from gravitational waves each weigh up to about 50 Suns. LB-1, detected from its orbital motion, has a mass of about 70. LIGO-Virgo / Frank Elavsky / Northwestern / Universita Statale Milano, Author provided

Astronomers are still trying to quantify the distribution of black holes across their full range of sizes.

Black holes weighing between 1,000 and 100,000 Suns (so-called intermediate-mass black holes) may reside at the heart of small galaxies or in big star clusters. The space-based Laser Interferometer Space Antenna (LISA) gravitational wave detector (scheduled for launch in 2034) will try to catch their collisions.

Black holes weighing a million to a few billion solar masses are already well known, in the nuclei of larger galaxies and quasars, but their origin is actively debated. We are still a long way away from a complete understanding of how black holes form, grow, and affect their environments, but we are making fast progress.