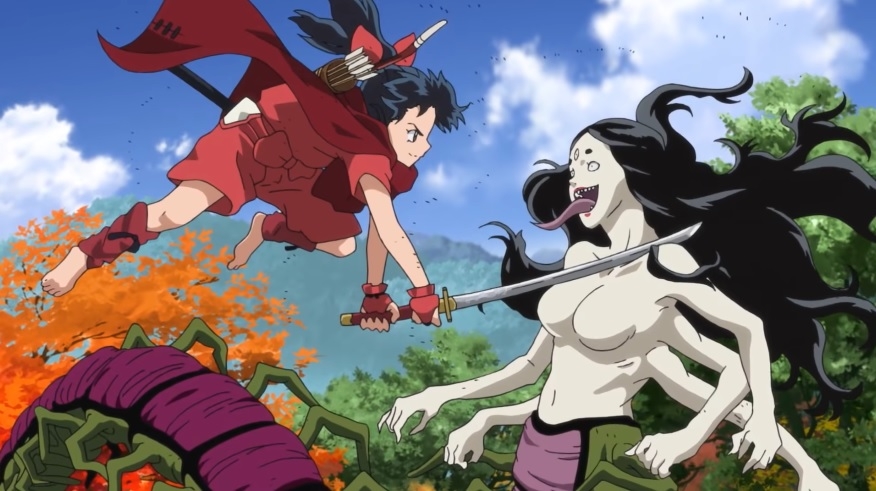 Since “Yashahime: Princess Half-Demon” premiered, fans have been looking forward to the weekly teasers in hopes of finding early clues of its connections with the original series. For “Yashahime: Princess Half-Demon” episode 5, many have pointed out that the similarities between an upcoming new character and another who previously appeared in the original series could be hinting at Miroku’s return.

The teasers for “Yashahime: Princess Half-Demon” episode 5 are putting all the attention on a new character named Jakotsumaru. He is described in the synopsis as a “suspicious child” removing bones from humans and beasts to resurrect his father, who is a demon named Tokotsu. Twin sisters Towa and Setsuna will come across Jakotsumaru as he becomes their target for a demon-slaying task.

While working on their target in “Yashahime: Princess Half-Demon” episode 5, the twins will also encounter Moroha. It turns out, Jakotsumaru has been planning to ambush Inuyasha and Kagome’s daughter because he blames her for his demon father’s death.

Meanwhile, eagle-eyed fans have spotted several similarities between Jakotsumaru and his demon father from the original manga and anime. Some fans say they are the same characters, while others point out some differences in their appearances.

These characters look VERY similar. It can't be a coincidence right?! from inuyasha

There are also suggestions that the demon showed in the “Yashahime: Princess Half-Demon” episode 5 preview could be the same one that Miroku fought in the original series. This has sparked speculations that Miroku could make an appearance in the next episode whether a brief scene in the present or through a flashback.

Note that there is no certainty to this theory yet, as it was also pointed out that the voice actor for Miroku is not included in the available episode 5 credits. Meanwhile, the “Yashahime: Princess Half-Demon” episode 5 information also lists two unfamiliar characters named Necromancer and Qiongqi. However, it is still unclear what role they will play in the trio’s face-off with Jakotsumaru.

“Yashahime: Princess Half-Demon” episode 5 will be released on Saturday, Oct. 31. Several platforms stream the new episodes every week, including Ani-One on its YouTube channel, AnimeLab, Crunchyroll, Funimation, and Hulu.