Vital Signs: talk of a US wealth tax is about symbolism as much as it is about economics 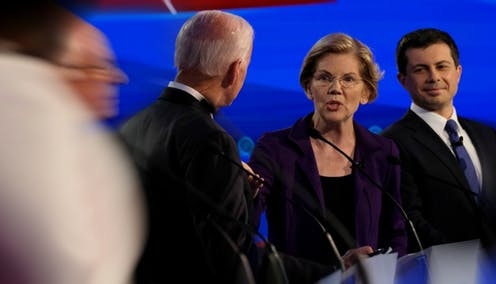 The race for the Democratic Party’s presidential nomination is hotting up, and so is academic debate about one of the leading contender’s signature proposal – a wealth tax.

The statistical front-runner, Warren, wants to impose a wealth tax of 2% on all Americans with wealth in excess of US$50 million.

This plan was developed by University of California Berkeley economics professors Emmanuel Saez and Gabriel Zucman.

They believe it would generate as much as US$187 billion a year, along with another US$25 billion from a separate so-called “billionaire surcharge” in the first year.

Former treasury secretary Larry Summers believes the measures would raise a mere eighth of that, about US$25 billion all up.

The debate on #econtwitter came to a head a few days ago at the Peterson Institute.

Check out the video. It’s what economists call a “vigorous discussion”.

For me, Summers and economist Natasha Sarin make a compelling case.

And they don’t come to the debate empty handed.

They’ve got their own ideas for taxing the better-off, which include boosting auditing resources for the Internal Revenue Service, cracking down on corporate tax shelters, ending loopholes for private equity and hedge fund managers, and eliminating special deals for real estate investors and investors who bequeath capital gain.

They reckon their ideas would raise more than even the rosiest estimates of Warren’s wealth tax.

But what about the theory?

There are four main arguments in favour of a wealth tax:

In terms of revenue raising, nobody on the progressive side of politics seriously disputes the social value of programs like universal childcare. What’s at issue is the best way to pay for them.

Each argument has a counter argument

As to limiting the political power of the uber wealthy, they would still have a lot. Lobbyists don’t cost much, and corporations themselves will still be able to spend as much as they like thanks to the US Supreme Court’s 2010 Citizens United decision that found it was unconstitutional to restrict independent expenditures on political communications.

The effects on innovation are hard to discern. It certainly seems as if Amazon president Jeff Bezos would be as motivated by US$80 billion per year as by US$120 billion.

But it mightn’t be that simple. For highly valuable people (lots of “human capital”) passing up a certain high salary (perhaps at a university) for an uncertain higher one is a risk. A cut in the uncertain payoff might tip the balance in favour of caution.

And then there’s politics

If it did tip the balance in favour of caution, a wealth tax might lead to less innovation, but the size of the effect is hard to guess at.

While economists like to muse about these issues, it’s the politics that matter.

A wealth tax polls well among American voters, even among millionaires, but Donald Trump might be able to turn that around.

It’s the politics as well as the economics that will matter, and symbolism will matter a lot.