Vital Signs: 35 extraordinary years. What the float of Australian dollar bought us 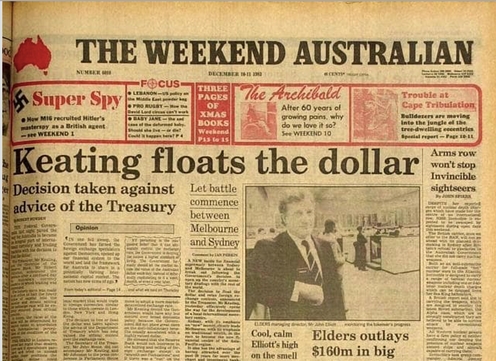 If a week is a long time in politics, then 35 years must be an eternity.

35 years ago, on Monday December 12, 1983, the Hawke-Keating government announced the Australian dollar would be floated.

That is, the prices set by willing buyers and sellers would determine the value of the dollar in US cents rather than decisions made at occasional and later daily meetings of Reserve Bank and Treasury.

Even by the mid-1970s the huge amounts of cash sloshing around international markets had made it hard to pick the right value.

Too expensive a dollar would mean Australians couldn’t get access to the foreign exchange they needed.

Too cheap a dollar would make imports expensive.

Yet floating it was not a white flag.

It was a bold decision – former RBA governor Glenn Stevens once described it as “one of most profound economic policy decisions in Australia’s modern history” – and one that set the stage for the 27 years of uninterrupted economic growth that began less than a decade afterwards.

It gave us a giant shock absorber

At first glance that looks like a whole lot of instability. In fact, the opposite is true.

After the mining boom ended and overseas buyers of our minerals had less need for our currency, the Australian dollar slid from US$1.10 to US$0.70.

As it happened, other Australian exporters and businesses gained a new lease of life, smoothing the adjustment and creating other homes in other parts of the economy for the labour and other resources that had been devoted to mining.

The floating dollar was just as useful as the mining boom was ramping up.

As foreign buyers tried to get hold of the Australian dollars they needed to pay for our minerals, the dollar climbed, making life harder for other exporters and firms that competed with imports who ceded labour and other resources to mining.

The higher dollar made imports cheaper, meaning we didn’t need to make as much, and pushing down inflation in order to give even Australians not connected with mining a higher standard of living – effectively spreading the benefits of the boom.

Australian businesses were also able to import as they couldn’t before – everything from earth-movers to robot production lines to personal computers –investing for the next boom.

It was an automatic stablisation that could never have been achieved by bureaucratic price-setting.

Then we freed the Reserve Bank

It was a bit the same with the Reserve Bank. Until the mid-1990s it needed to consult with the Treasurer before moving interest rates.

Its declaration of independence, in a document countersigned by the newly appointed Treasurer Peter Costello in 1996, opened the way for it respond to shocks – such as the financial crisis of 2008 – without involving politicians.

The Treasurer does no more than ask it to keep inflation low (2-3% pa) while keeping employment and economic growth sustainability high. The rest is up to the Reserve Bank.

Because it is less likely than the government to succumb to political pressure, its resolve to do these things isn’t doubted. It has been able to embed low inflationary expectations in a way the government might not have been able to, making disastrous wage-price spirals a thing of the past.

And while there is an important debate about what the right monetary policy framework should be in a post-2008 world, there is little debate that Reserve Bank independence is crucial for implementing it.

The world’s fifth most traded currency

Australia is the world’s 15th to 20th largest economy – depending on how it is measured – but it has the fifth most traded currency.

As I noted in a report for the US Studies Centre and American Chamber of Commerce, the Australian dollar is globally relevant. It is increasingly used as a proxy for Asia and for commodity currencies.

The Australia-US dollar pair is the fourth most traded pair in the world. That wouldn’t be possible without a freely floating currency.

It’s about more than vanity. Much of the funding that Australian banks need comes not from deposits but from overseas capital markets. It allows them to lend as needed, unconstrained by the extent of their deposits.

They wouldn’t have that access to overseas capital markets unless the Australian dollar floated; unless it was always possible to find a price at which they could bring in overseas funds.

Bob Hawke and Paul Keating’s floating of the dollar was a one-off. It can’t happen again. 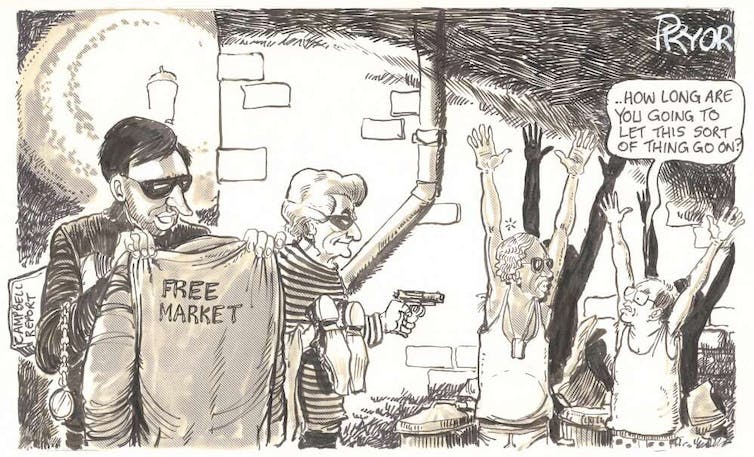 But there are other big reforms in prospect. On issues from climate change to tax reform to immigration, it is important to get the underlying settings right.

As could have happened with the dollar, the costs of getting them wrong could be enormous.