Singaporean inflation likely remained stable in December, expected to accelerate in months ahead

NZ’s CPI lifts in Q4, exceeds both market as well as RBNZ’s expectations

Canada’s retail sales likely to have rebounded in November 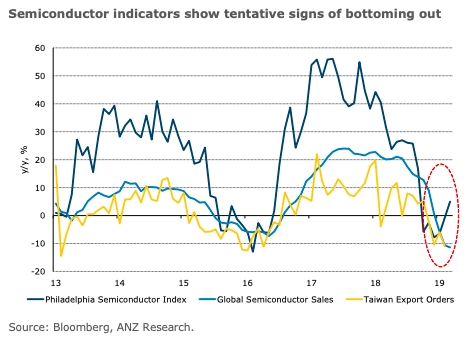 Taiwan’s export orders remained weak during the month of March on an annual basis, but sequential data showed some improvement both at the headline level and in the electronics and infocomm product segments; however, some stabilisation and recovery in the near term is expected, albeit at a gradual pace, according to the latest report from ANZ Research.

Even though absolute levels for both product segments remain lower than the Q4 2018 average and in January 2019, the improvement is encouraging. The MOEA has forecast that export orders in April 2019 would range between USD35.5 billion to USD36.5 billion, implying a y/y decline of 6.7 percent to 9.2 percent y/y.

The forecast appears broadly consistent with the 8.7 percent y/y fall in South Korea’s exports over the first 20 days of April. As such, the slump in global sales of semi-conductors has continued. In March, sales declined 11.4 percent y/y, the report added.

On the other hand, the Philadelphia Semiconductor Stock Index, which has been a good leading indicator of semiconductor sales has strengthened indicating an imminent recovery.

"It is also important to bear in mind that the inventory-shipment in Taiwan has risen in recent months and therefore, an improvement in export orders will take time to translate into production," ANZ Research added in its comments.