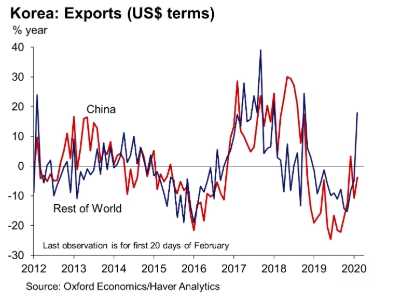 The coronavirus outbreak is expected to dampen South Korea’s exports and industrial production due to weaker Chinese demand. This is mainly due to the lockdowns in several Chinese cities and delays in economic activity resuming after the Chinese New Year, according to the latest research report from Oxford Economics.

Electronics, autos and electrical equipment sectors are especially exposed to supply-chain disruption due to their high reliance on intermediate imports from China. Major exports such as semiconductors, machinery and chemicals are also vulnerable due to their sizeable exposure to the Chinese market.

But as China’s policymaking shifts toward resuming economic activity, the impact from supply-chain disruption will likely be short-lived.

"We expect the Korean government to step up fiscal support to cushion growth. In addition, we now expect the BOK to cut interest rates by 25bp at its upcoming monetary policy meeting. Clearly, the impact of the rate cut will be minor – the main boost will still have to come on the fiscal side – but this will nevertheless send a signal to reassure businesses and consumers," the report added.

Before the coronavirus outbreak in mainland China there had been signs of green shoots appearing in the South Korean economy amid dissipating US-China trade tensions.

Exports to China, its largest export partner, were positive in December for the first time in 14 months, while CPI inflation rose to 1.5 percent y/y in January following months of consumer price weakness. However, the virus epidemic has upended expectations of a pick-up in growth this year, Oxford Economics further noted in the report.