Bill Shorten has promised his government would introduce a A$2.3 billion four year package to slash cancer patients’ out-of-pocket costs, and has committed $1 billion to give extra tax relief for low income earners, above what they would get from Tuesday’s budget.

In his budget reply on Thursday night, the opposition leader pitched to voters on a Labor strength - health - declaring his cancer care plan would be the “most important investment in Medicare since Bob Hawke created it”.

Shorten rejected the government’s second and third tranches of tax cuts, due to start in 2022-23 and 2024-25 and worth about $143 billion of the $158 billion ten year package. The last stage was a “radical, right-wing, flat tax experiment”, far off in time and skewed disproportionately to a relative few, he said.

“What we need is a fighting fund for the country, a strong surplus to protect us from international shocks”, he said.

He attacked the government - which has a $7.1 billion surplus in its budget for next financial year - for “shortchanging the NDIS by $1.6 billion, to prop up a flimsy surplus forecast”.

Shorten - who in his speech referred to his late mother Ann’s battle with breast cancer – said the cancer care plan would provide for millions of free scans and consultations, and cheaper medicines.

Cancer “is frightening, it’s isolating, it’s exhausting”. And all too often, it was impoverishing, he said.

“For so many people, cancer makes you sick and then paying for the treatment makes you poor. And that’s a fact that I think a lot of Australians would be surprised to learn.

"Because if you haven’t been through it yourself, you might not realise that all those vital scans and tests and consultations with specialists aren’t fully covered by Medicare. Instead, they cost hundreds of dollars, adding up to thousands, out of your own pocket,” he said.

One in four women with breast cancer paid more than $10,000 for two years of scans and tests, he said. Some men with prostate cancer were paying more than $18,000. Most people with skin cancer - and Australia has the highest rates of this cancer in the world - paid more than $5000 for the first two years of treatment.

Each year 300,000 people who needed radiology did not get it, because they couldn’t afford it.

People needing treatment for cancer were often not well enough to work, so they were already under massive financial strain, Shorten said. Those living in regional areas had the extra costs of travel and accommodation.

A Labor government would: 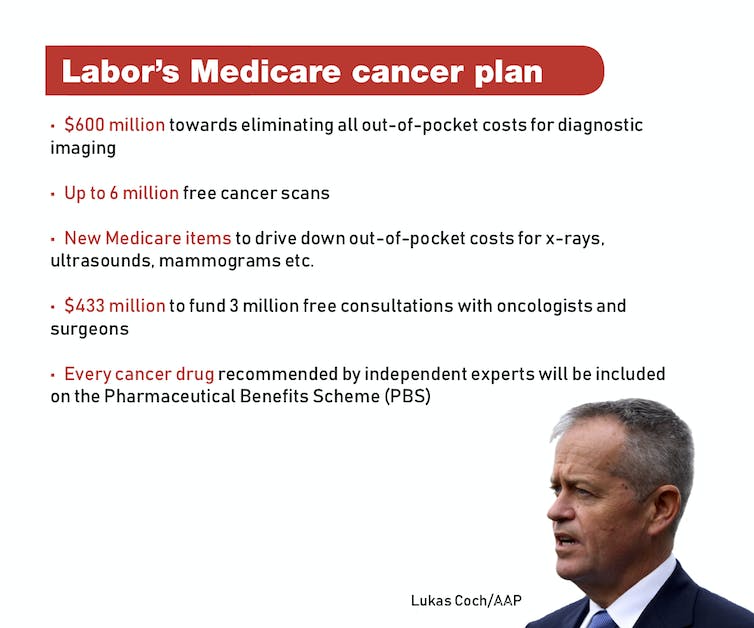 In Labor’s first budget Labor would provide a bigger tax refund for low earners than the Liberals proposed.

“6.4 million working people will pay the same amount of income tax under Labor as the Liberals - and another 3.6 million will pay less tax under Labor” he said. “All told, an extra billion dollars, for low income earners”.

On TAFE Shorten promised to double the size of Labor’s rebuilding TAFE program - up to $200 million - to renovate campuses.

Labor is committed to paying the upfront fees for 100,000 TAFE places to get more Australians in high priority courses. “I am proud to announce that 20,000 of these places will be allocated to a new generation of aged care workers and paid carers for the NDIS,” Shorten said.

Finance minister Mathias Cormann said Shorten had put forward an agenda for $200 billion in higher taxes that would weaken the economy and bring higher unemployment. 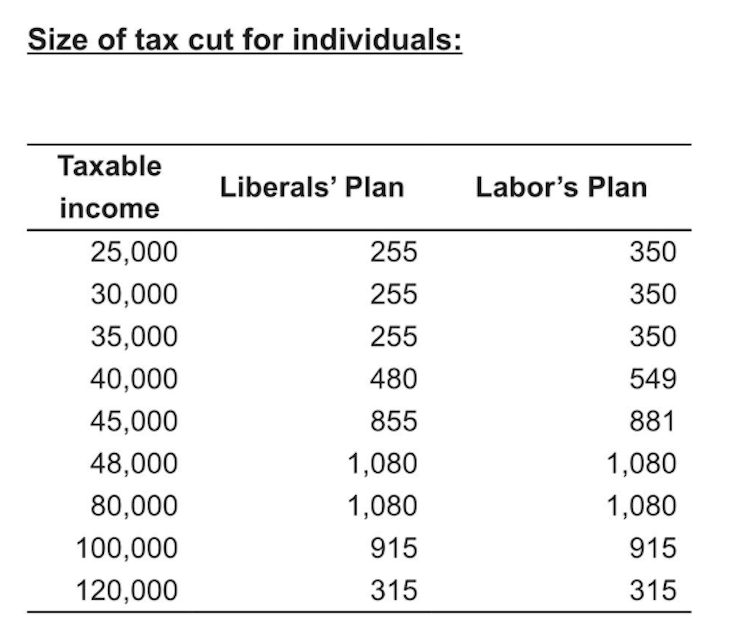