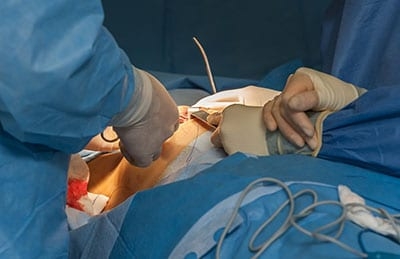 The system uses a small light projection device to broadcast a video of breast cancer captured by a camera onto the afflicted region for surgeons.

The system, developed in collaboration with the institution, local AR developer Apros Corp., and the National Cancer Center, uses a small light projection device to broadcast a video of breast cancer captured by a camera onto the afflicted region for surgeons.

The near-infrared fluorescence probe video system that is typically used for breast cancer surgery does not allow surgeons to see the wavelength of the light generated by the fluorescent contrast agent with their naked eyes, necessitating the use of a separate monitor with a dedicated camera for the surgery.

The innovative method reflects real-time changes in the position of breast cancer cells caused by human tissue flexibility, and shows the video immediately on the affected area to aid the surgeon's attention, reducing the time spent on the surgery.