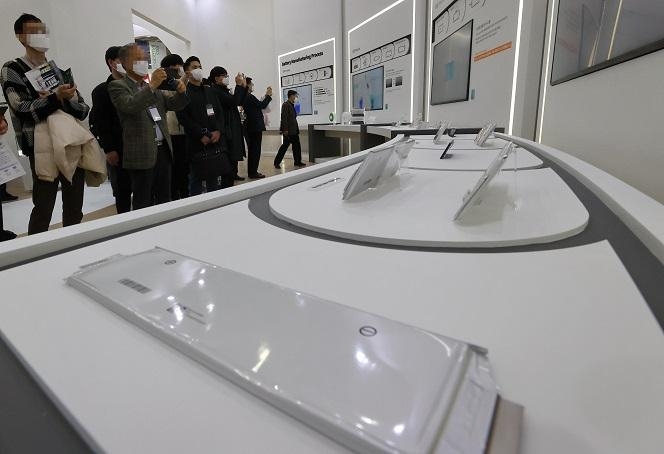 A booth at InterBattery 2022, an international exhibition on rechargeable batteries, at COEX in Seoul on March 17, 2022. (Yonhap)

South Korea’s battery makers LG Energy Solution Ltd. (LGES) and Samsung SDI Co are aggressively expanding on research and development and facility investments despite a cost burden arising from a surge in the prices of raw materials.

According to LGES' quarterly report, the company's cathode material procurement price averaged US$34 per kilogram in the first quarter of this year, up 56% from the same period last year.

In the first quarter of this year, Samsung SDI Co.'s average cathode material acquisition price increased by 24.4 percent year on year to $34.8 per kilogram.

Typically, the nation's battery manufacturers create nickel cobalt manganese battery cells. The cost of cathode materials increased in tandem with the cost of other components.

Despite the rise in cathode material prices, battery manufacturers are actively increasing investment.

LGES spent 909 billion won on facility development in the first quarter of this year, more than double its previous investment.

In the first quarter of this year, the business invested 20.6 trillion won in factories in Poland, China, and the United States, an increase of 5.6 trillion won from the previous year.

R&D investment increased by 41.4 percent during the same time, rising from 129.8 billion won to 183.6 billion won. R&D's percentage of overall sales increased from 3.1 percent to 4.2 percent.

According to experts, the key driver of battery producers' investment expansion is their desire to achieve a breakthrough through aggressive investment in an environment characterized by geopolitical uncertainty and supply chain hazards.