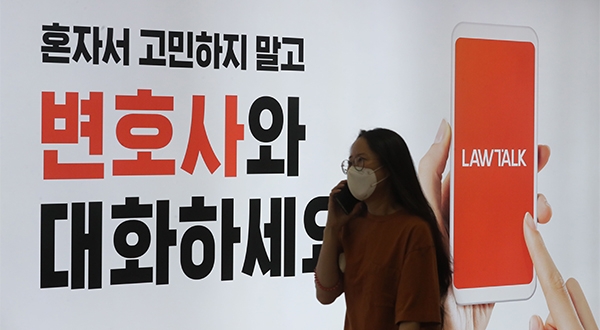 The Law Talk app does not receive any commissions from member attorneys and only earns from advertisements.

The Seoul Central District Prosecutor’s Office dismissed accusations that the app LawTalk and its operator Law & Company Co. violated the Attorney-at-law Act and the Privacy Act as it is provided for free.

The app does not receive any commissions from member attorneys and only earns from advertisements.

The Attorney-at-law Act bans acts of introducing or recommending a designated lawyer.

The allegations that the AI-based penalty estimation service was run despite the fact that it was not an attorney were dismissed because the service is provided for free.

The prosecutor's office also disputed the notion that LawTalk's motto, which claims to evaluate a case in 15 minutes by an attorney, gives the misleading impression that the company provides legal services.

The prosecutor's office also dismissed another charge that LawTalk violated the Privacy Act by illegally collecting court cases containing personal information because LawTalk obtained them through the country's official court website, leaving no proof of illegal tampering with its systems.

After a bar organization sued Law & Company at the prosecutor's office in November 2020, the matter went viral.