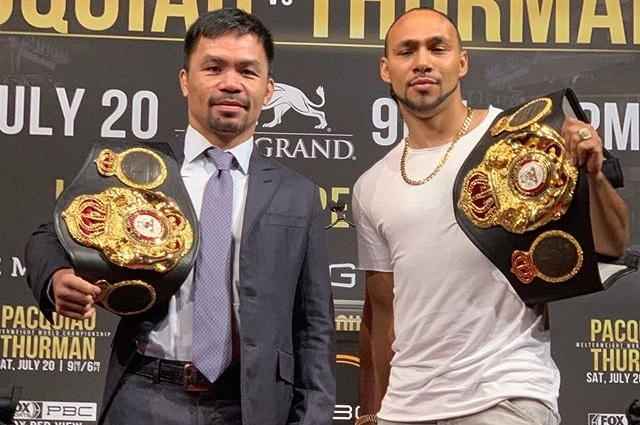 Pacquiao vs. Thurman is happening three days, and both camps are itching to be on the ring already. The two are facing off at the MGM Grand in Las Vegas on July 20, and it will be streamed worldwide.

Between Manny Pacquiao and Keith Thurman, it is easy to see that it is the former who will drive the pay-per-view up. This is actually very obvious since this was the same case when the Filipino boxer fought Adrien Broner and the others.

In any case, Thurman has been dissing Pacquiao for weeks and has been saying things as he should just play basketball because his time in pro-boxing is already up. He also sometimes belittles Pacman’s power because he is already “old,” but the Filipino champ said that these disses actually motivates him to win.

In his interview with Fight Hub TV, Manny Pacquiao said that he is excited and although this is just one of his matches, this feels kind of different. He also admitted there were times that Thurman got under his skin for his nonsensical comments because there were personal attacks already.

However, Pacquiao said that this made him want to clinch the WBA super welterweight belt even more. He wants to snatch the title from Thurman because he wants to prove something to him.

Keith Thurman wants Pacquiao to retire after their match on Saturday. The 30-year-old American boxer previously said that it is time for Pacman to hang his gloves just like the others, and it is his time now to dominate the boxing world.

"I'm gonna make a big statement. You are not gonna want to miss this fight, especially because it's about to be this man's last fight," ESPN quoted Thurman as saying during a kickoff news conference in May. "I believe boxing has come to a new era. Floyd is gone, Pacquiao's here and come July 20, he will disappear, and this most likely will be his last fight."

Meanwhile, Forbes reported that if Keith Thurman manages to score a victory over Manny Pacquiao, he can go back to where he belongs in the welterweight scene. The publication deduced that Thurman actually has a chance because he has youth, height, reach, and overall size advantage.