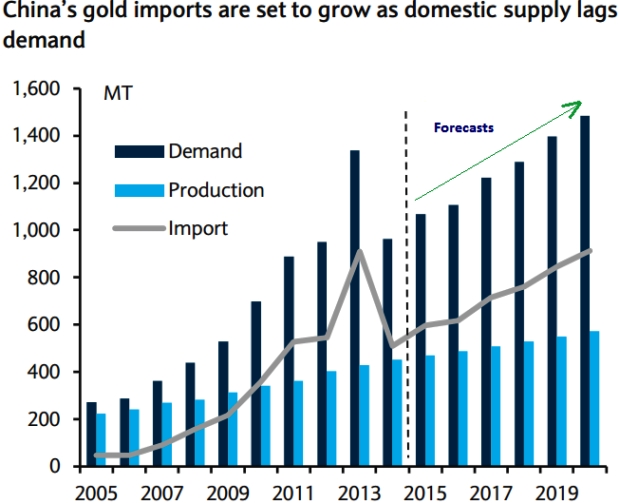 Mounting real income and associated jewellery consumption is the main driving force of Chinese demand. Greater investment demand, as China continues to develop its gold investment markets, is a further source of support. Finally, we expect China's PBOC to continue to accumulate gold in its reserve, given the metal's low share in its vast FX reserves.

In contrast, we see constraints on China's gold production and, as a result, we expect a growing gap between domestic supply and demand, thus the need for growing imports. In the 12th five-year plan (FYP) covering 2010-15, the government set a target of 420-450 tonnes of gold production by 2015, representing an annual growth rate of 3-5%. This was handily met with 2014 production estimated at 461.8 tonnes by GFMS while China Gold Association estimates that H1 15 production reached 228.7 tonnes. For the next five years, we see limited upside to the production growth rate and, as a result, we forecast a 4% annual increase in production.

At this forecast rate, China would produce more than 570 tonnes of gold by 2020; however, this would still leave import demand rising from 511 tonnes in 2014 to 912 tonnes in 2020, an increase of almost 80%. The main constraining factor we see in China's gold production is its domestic reserves. China is one of the world's largest gold producers, but there are questions regarding its mine reserves.

The Chinese government has estimated that domestic mine reserves to be between 8-9,000 tonnes. However, the US Geological Survey estimated China's gold reserve at only 1,900 tonnes. In either case, China is producing at a high rate against its mine reserves, with annual production 70% higher than Australia, the country with the largest reserves.