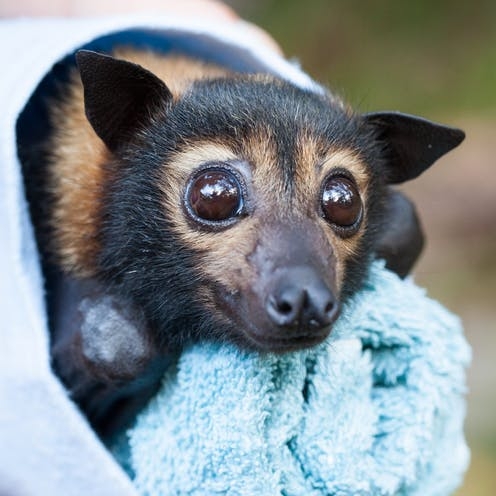 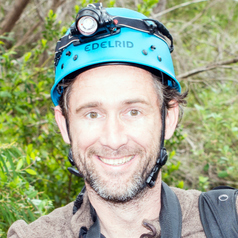 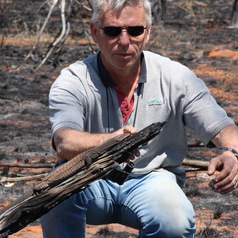 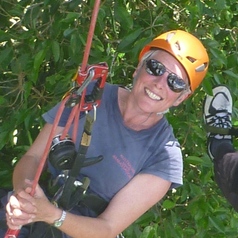 On Saturday, Cairns Regional Council will disperse up to 8,000 endangered spectacled flying-foxes from their nationally important camp in central Cairns.

This planned dispersal – which the council says is in the interests of the species – is set to conclude a long series of controversial management actions at the site. The EPBC Act failed to protect the species at every turn. The camp may now be non-viable for the flying-foxes. 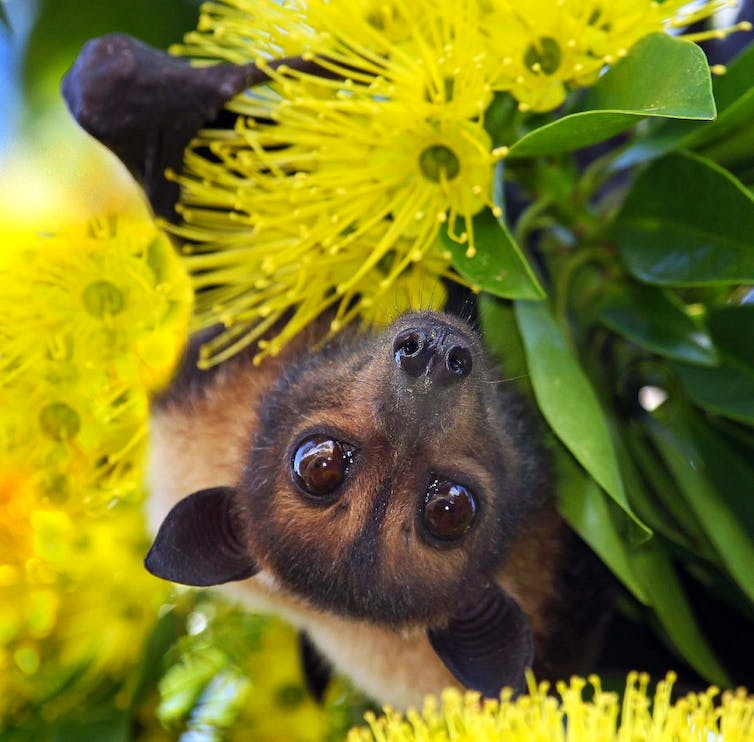 Decline of the rainforest specialist

Spectacled flying-foxes are critical for pollination and dispersing fruit in Australia’s Wet Tropics, and so underpin the natural values of this world heritage-listed region.

But habitat destruction and harassment largely caused the species’ population to drop from 250,000 in 2004 to 75,000 in 2017. Subsequent monitoring has, so far, shown no sign of recovery.

In late November 2018, another 23,000 bats – a third of the population – died from heat stress. It marks the second largest flying-fox die-off in recorded history.

Today, the camp is not only home to a big portion of the species, but also around 2,000 pups each year. Flying-foxes are extremely mobile in the region, so the camp provides a roosting habitat for more than what’s present at any one time. 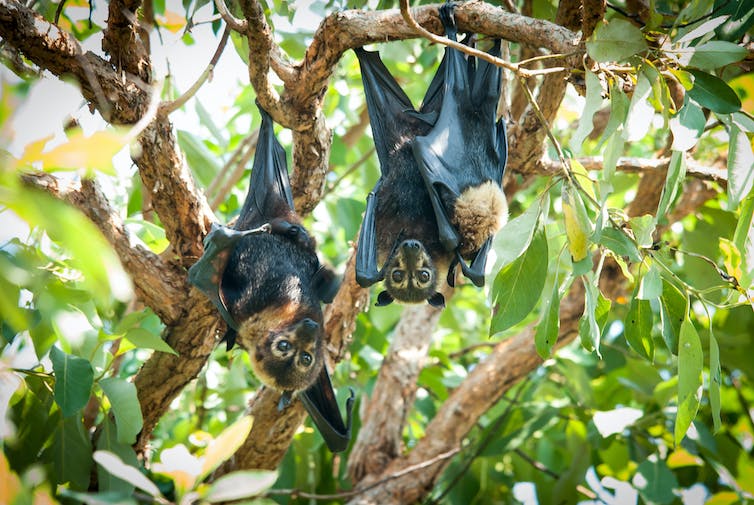 Endangered spectacled flying-foxes are set to be dispersed from their camp in Cairns CBD, one of the last strongholds of the species. Justin Welbergen

The council is permitted to disperse the flying-foxes with deterrent measures, including pyrotechnics, intense lighting, acoustic devices and other non-lethal means.

The Conversation sought a response to this article from Cairns Regional Council. A spokesperson said:

Relocation measures will only occur between May and September – outside of the spectacled flying fox pup rearing season to avoid a disruption to the species’ breeding cycle.

The relocation activity will be undertaken by appropriately qualified and experienced individuals and non-lethal methods will be used.

The program is tailored to minimise any stress on the animals and causes no injury of any type.

However, ample evidence shows dispersals are extremely costly, ineffective and can exacerbate the very wildlife management issues they aim to resolve.

Dispersals risk stressing the already disturbed animals, and causing injuries and even abortions and other fatalities. They also risk shifting the issues to other parts of our human communities, as the bats tend to end up settling in an unanticipated location after having been shuffled around town like a game of musical chairs.

Even in the often-cited example of the “successful” relocation of vulnerable grey-headed flying-foxes from the Melbourne Botanic Gardens in 2003, experts couldn’t direct the bats to their designated new camp.

Instead, the flying-foxes formed a permanent camp at Yarra Bend, one kilometre short of the intended destination, where they’re now subjected to renewed calls for culling or dispersal. 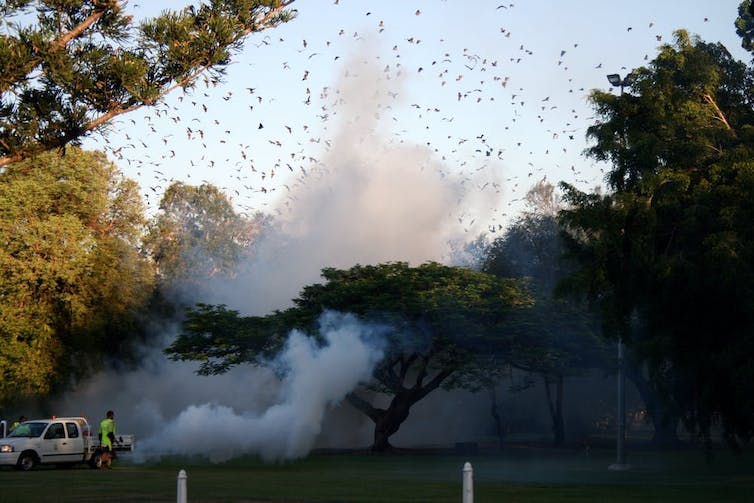 ‘Fogging’ is one of several methods used to disperse flying-foxes from their camps. Australasian Bat Society

Cairns Regional Council argues their decision to attempt to move the bats to the Cairns Central Swamp is in the long-term interest of their survival. A council spokesperson says:

Also, the health of roost trees at the library site, and therefore the viability of the site as a spectacled flying fox roost, is diminishing.

Council believes relocation will mitigate human/flying fox conflict, enable the trees at the library to recover, and will likely reduce the high rates of pup mortality that have been recorded at the library colony.

But these animal welfare concerns arose from the accumulated impacts of the council’s poor management actions, or actions the council supported.

In 2014, the council was found guilty, under the Queensland Nature Conservation Act, of driving away spectacled flying-foxes and illegally pruning the habitat trees. 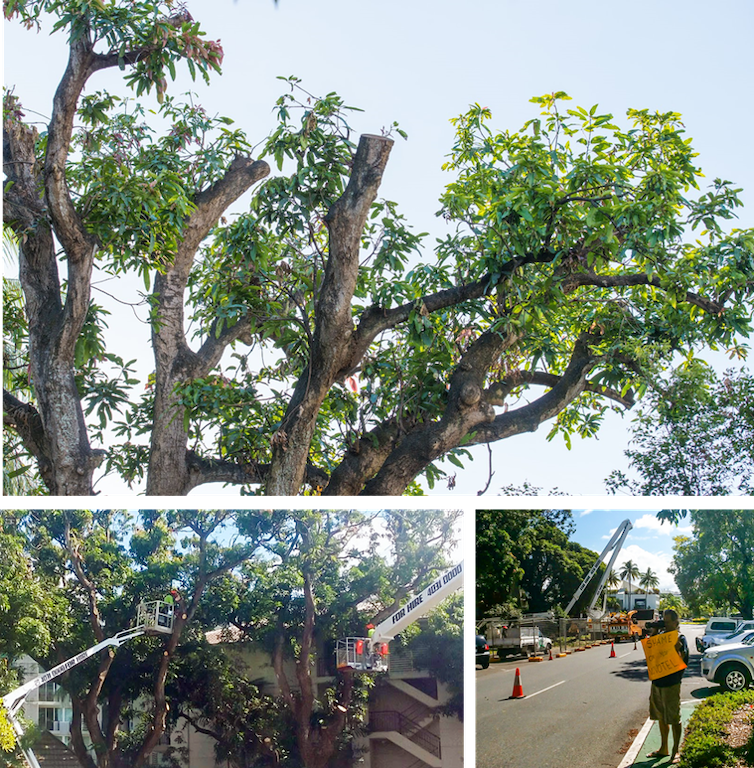 Over the past seven years, most roosting trees of the Cairns CBD camp were either removed or heavily pruned, resulting in the destruction of more than two-thirds of the available roosting habitat. Provided by authors

The Cairns camp was then subjected to a series of EPBC-approved roost tree removals in 2014, 2015, 2016 and 2017. Collectively these destroyed more than two-thirds of the available roosting habitat at the site.

This directly contradicts the specific EPBC Act referral guideline, which states actions to manage the flying-fox camps should not significantly impact the species.

And in 2015, Cairns Aquarium developers had to destroy trees home to hundreds of spectacled flying-foxes before they could start construction. That’s because under the EPBC Act, no building near or around the flying-foxes is permitted. In this case, the act’s well-intentioned protection measures caused far more harm than good. 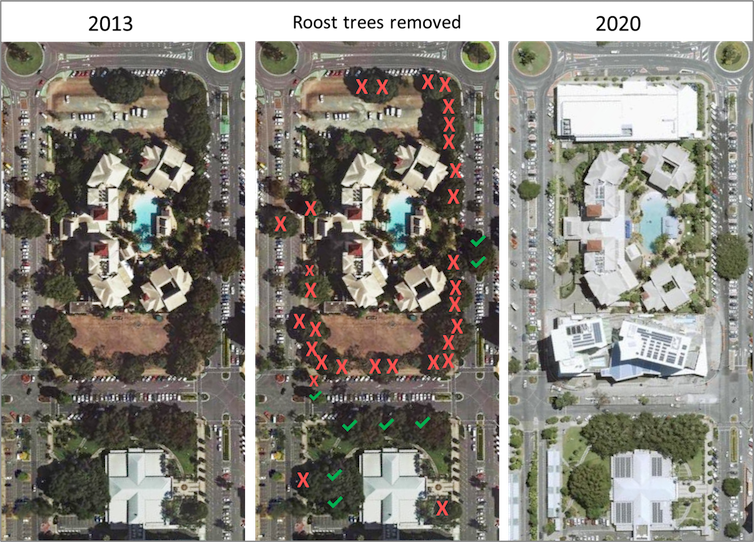 Removals (X) of roost trees from the Cairns flying-fox camp between 2013 and 2020. The new white rectangular buildings visible in 2020 are high-rise hotel (centre) and Cairns aquarium (top) developments Provided by authors

In the meantime, the national conservation status of the spectacled flying-fox moved too slowly from “vulnerable” to “endangered” in the listing process.

In 2017 the government’s own Threatened Species Scientific Committee advised listing the species as endangered, which would provide them with more protection.

But when the spectacled flying-fox was finally declared endangered in February 2019, they already qualified as critically endangered, according to official guidelines.

What’s more, the state government’s recovery plan for the spectacled flying-fox – in place since 2010 – has never been implemented.

Are there any solutions?

There are no solutions under the EPBC Act as it’s currently framed.

The tragic end to the story is that a dangerous precedent is being set for flying-fox management in Australia. Bat carers in Cairns are readying themselves for an influx of casualties from the dispersal.

Some bat carers have sadly reached the conclusion the dispersal is now the least-bad option for the bats after their stronghold suffered a death by a thousand cuts, leaving their home unviable.

The review of the EPBC Act must see strengthened legislation to prevent such tragic outcomes for our threatened species. Australia’s inadequate protections allow species to be pushed towards extinction at one of the highest rates in the world.

Maree Kerr contributed to this article. She is a co-convenor of the Australasian Bat Society’s Flying-Fox Expert Group; an invited expert on the Cairns Regional Council’s Flying-fox Advisory Committee; President of Bats and Trees Society of Cairns; and is studying the role of education in public perceptions of flying-foxes at Griffith University

Evan Quartermain contributed to this article. He is Head of Programs at Humane Society International and a member of the IUCN World Commission on Protected Areas.