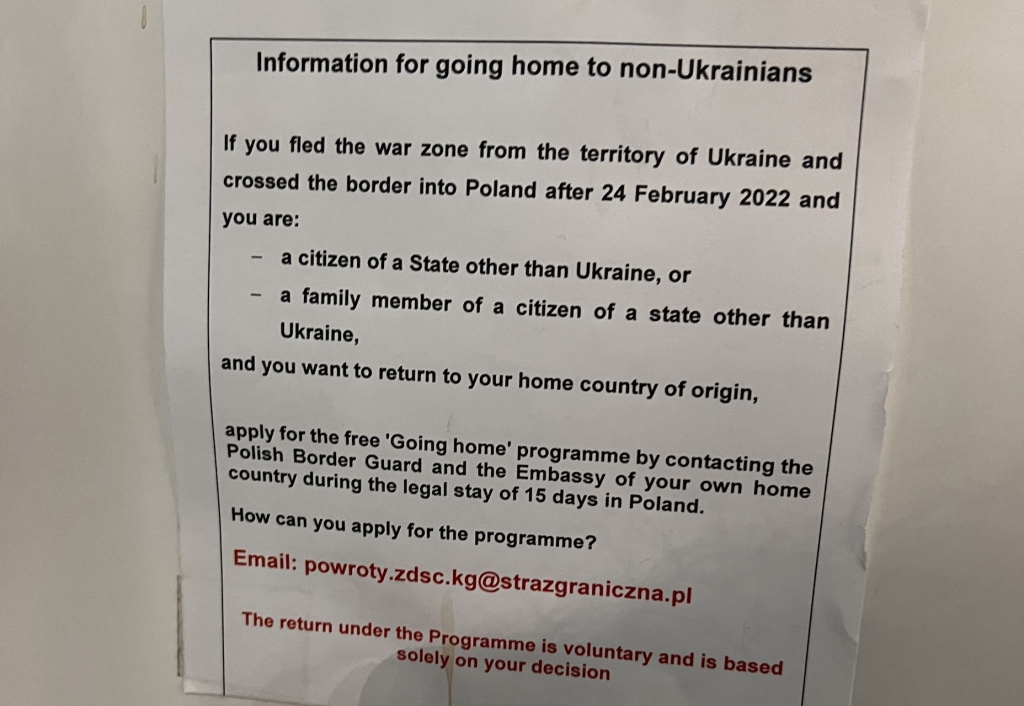 A poster on the ‘Non-UA (Ukraine) Refugee’ booth at the Warsaw Central Station with information on how non-Ukrainians can go back to their home countries. (Yvonne Su) 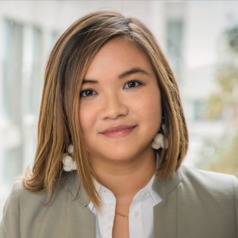 After having to flee the war in Ukraine, most third-country nationals are now trapped in legal limbo, with little to no options to stay in Europe.

Despite all the protection, residency programs and aid for Ukrainian nationals, very little is offered to third-country nationals who fled the same war.

Third-country nationals have to navigate the bureaucracies of asylum alone or through Telegram or WhatsApp mutual support groups. And if they can’t find a way to stay in the EU, whether it be through a successful asylum claim or student visas, most will be deported back to their home country.

There were approximately 60,900 undocumented people and 77,000 international students in Ukraine before the war.

When the invasion started, most of these people had to flee, entering neighbouring European countries and becoming third-country nationals.

The activation of the EU’s Temporary Protection Directive — which allows Ukrainian refugees the right to live and work in the EU for up to three years — has put Ukrainian nationals into an exceptional category that gives them rights and protections without having to go through the bureaucratic asylum-seeking process.

In essence, Ukrainians have been granted refugee status for three years in the EU without applying through the typical process. Non-Ukrainian third-country nationals — like those from African countries — were excluded from this scheme and must apply for asylum regularly if they want to stay.

NGOs and activists describe the neglect of third-country nationals as the “barbarity of racism.”

Berlin’s Refugee Council and other NGOs held a protest on May 17 in front of the Bundestrat in Berlin (a German legislative body) to demand equal rights for third-country nationals fleeing Ukraine.

They argue that, despite Ukrainians receiving unbureaucratic access to residence permits, work permits and social benefits in Germany, many third-country nationals are excluded from the right to temporary protection. They demand “equal treatment for all people who have fled Ukraine.”

Juilianne Gebel, co-founder of NGO Internationals from Ukraine and Friends, told DW the exclusion of third-country nationals shows there are “different treatments of different refugees depending on passport.”

‘For Ukrainian nationals only’

In late April 2022, I went on a research trip to Warsaw, Krakow and Berlin and observed that, at the central train stations where most of the NGOs and assistance for refugees from Ukraine were concentrated, the majority of the support was only for Ukrainian nationals. 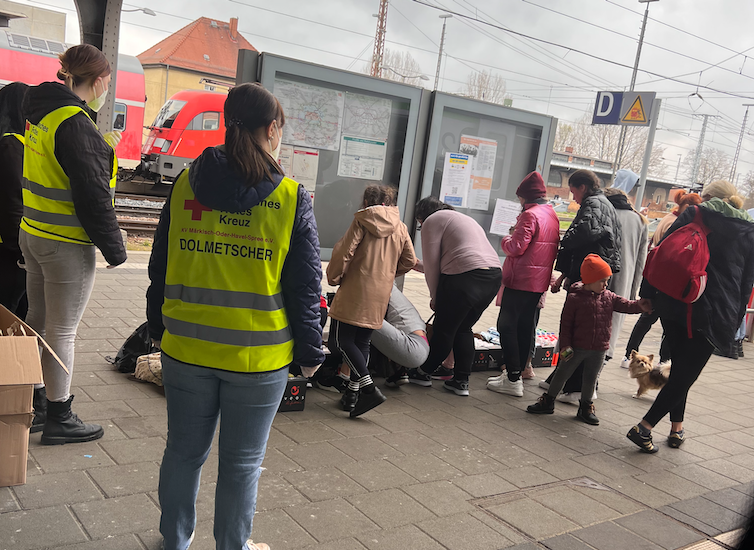 Ukrainian nationals have access to free transportation in the EU if they can show their Ukrainian passports. (Yvonne Su)

Upon entry to Warsaw Central Station, there is a table well-staffed with volunteers with a binder of resources ready to help. There is even a map of the EU with daily free routes — either by bus or train — to different countries.

When asked if transportation was free for all people who fled Ukraine, the volunteers replied, “No, for Ukrainian nationals only.” 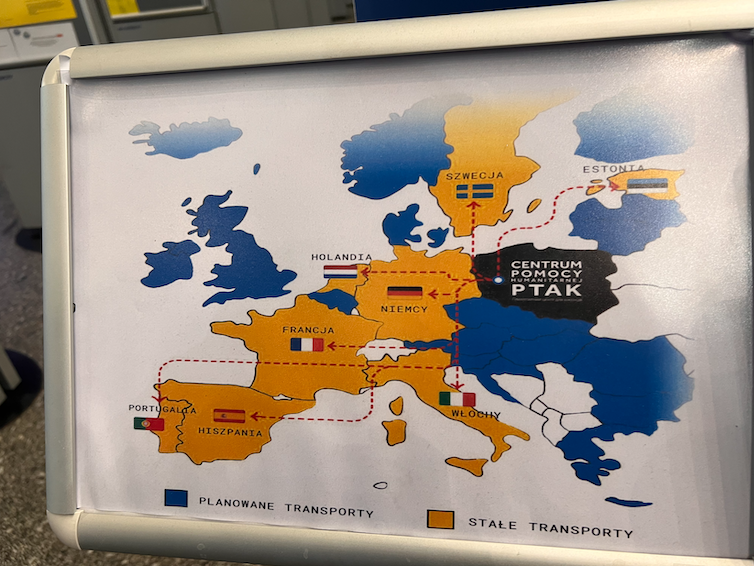 The yellow countries are where there are established daily routes (like buses or trains) that Ukrainian passport holders can take for free. (Yvonne Su)

The volunteers shared that there is not much information regarding third-country nationals in the binder, which was given to them by the city.

They were told to direct questions to the “Non-UA (Ukraine) refugee” — booth, which was just a bulletin board of information in English and Ukrainian. I passed through Warsaw Central Station multiple times on three different days and never saw a volunteer at that “booth.” 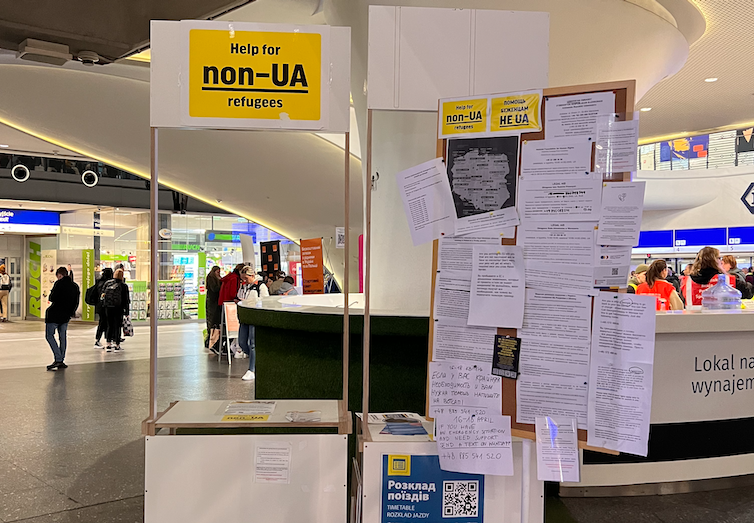 The ‘Help for non-UA refugees’ booth located under the stairs, in a hard to see place, at Warsaw Central Station. (Yvonne Su)

Another station, Berlin Central Station, did have a very visible booth for non-UA refugees, but the volunteers there were unable to answer any questions and were only able to give away pamphlets and refer people to local NGOs for help.

While I am a researcher and not a refugee, I can imagine this sort of interaction for a third-country nationals might be quite disheartening as they are, once again, met with someone who cannot help them.

For third-country nationals, the lack of protection and rights afforded by the EU, the lack of information available to them and the inability for volunteers to assist them illustrates the invisible violence of the bureaucracies of asylum.

Third-country nationals are left powerless in the face of bureaucracies of asylum to suffer the barbarity of racism with only the help of others in the same situation.