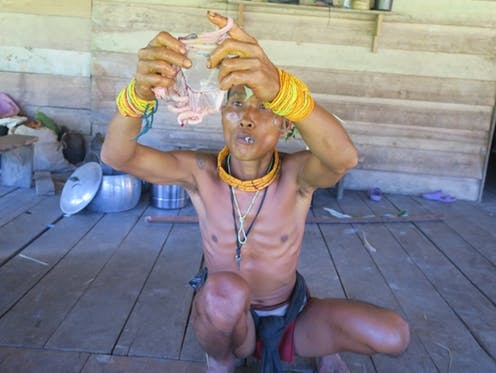 Examining chicken intestines, reading the tea leaves, watching the markets – people turn to experts for insight into the mysteries that surround them. Manvir Singh, CC BY-ND 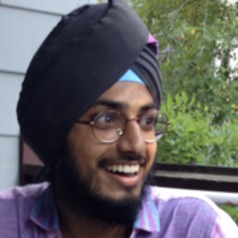 Aka Manai explains that there are two kinds of people in the world: simata and sikerei.

I am a simata. He is a sikerei. Sikerei have undergone transformative experiences and emerged with new abilities: They alone can see spirits.

I’ve experienced a lot since that night in Indonesia when Aka Manai told me this. I was there when an initiate first saw spirits, when he and the other sikerei wept as they saw their dead fathers swirling around them. I’ve attended seven healing ceremonies, witnessing the slaughter of dozens of pigs to accompany nights of dancing. But that chat with kind-faced Aka Manai, more than any other experience, grounded my understanding of sikerei in particular and shamanism more generally. 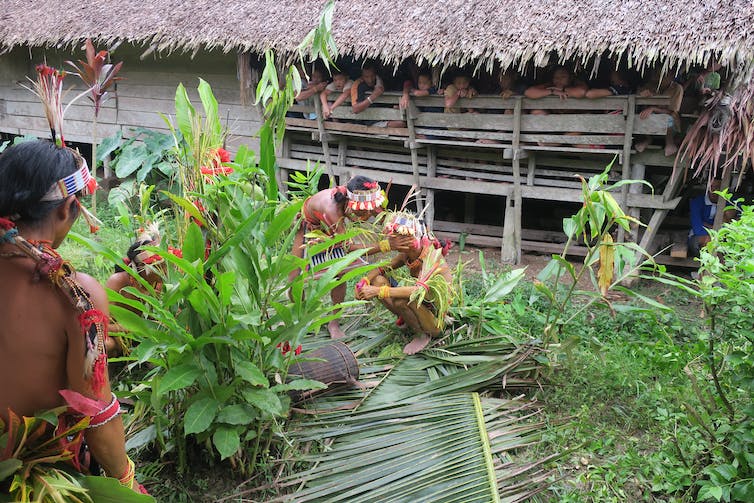 A sikerei treats an initiate’s eyes so he, too, can see spirits. Manvir Singh, CC BY-ND

I’m a cognitive anthropologist who studies why societies everywhere develop complex yet strikingly similar traditions, ranging from dance songs to justice to shamanism. And though trancing witch doctors may sound exotic to a Western reader, I argue that the same social and psychological pressures that give rise to healers like Aka Manai produce shaman-analogues in the contemporary, industrialized West.

What is a shaman?

Shamans, including the sikerei I’ve known in Indonesia, are service providers. They specialize in healing and divination, and their services can range from ending a drought to growing a business. Like all magical specialists, they rely on spells and occult gizmos, but what makes shamans special is that they use trance.

Trance is any foreign psychological state in which a practitioner is said to engage with the supernatural. Some trances involve complete immobilization; others appear as tongue-lolling convulsions. In some South American groups, shamans enter trance by snorting a hallucinogenic powder, transforming themselves into crawling, unintelligible spirit-beings.

Being a shaman often carries benefits, both because they get paid and because their special position grants them prestige and influence.

But these advantages are offset by the ordeals involved. In many societies, a wannabe initiate lacks credibility until he (and it’s usually a he) undergoes a near-death experience or a long bout of asceticism.

One aboriginal Australian shaman told ethnographers that, as a novice, he was killed by an older shaman who then replaced his organs with a new, magical set. When he woke up from the surgery and asked the old shaman if he was lost, the old man replied, “No, you are not lost; I killed you a long time ago.”

A long time ago, a short time ago, here, there – wherever you look, there are shamans. Manifesting as mediums, channelers, witch doctors and the prophets of religious movements, shamans have appeared in most human societies, including nearly all documented hunter-gatherers. They characterized the religious lives of ancestral humans and are often said to be the “first profession.”

Why are there shamans?

Why is it that when we lanky primates get together for long enough, our societies reliably give rise to trance-dancing healers?

According to anthropologist Michael Winkelman, the answer is wisdom. Drugs and drumming, he’s argued, link up brain regions that don’t normally communicate. This connection yields new insights, allowing shamans to do things like heal sickness and locate animals. By specializing in trance, shamans uncover solutions inaccessible to normal brains.

Based on my fieldwork, I’ve argued against Winkelman’s account. Rather than all integrating people’s psychologies, trance states are wildly diverse. Chanting, sipping psychoactive brews such as ayahuasca, dancing to the point of exhaustion, even smoking extreme quantities of tobacco – these methods produce profoundly different states. Some are arousing, others calming; some expand awareness, others induce repetitive thinking. In fact, the only element shared among these states is their exoticness – that once altered, the shaman’s experience stands apart from those of his onlookers. 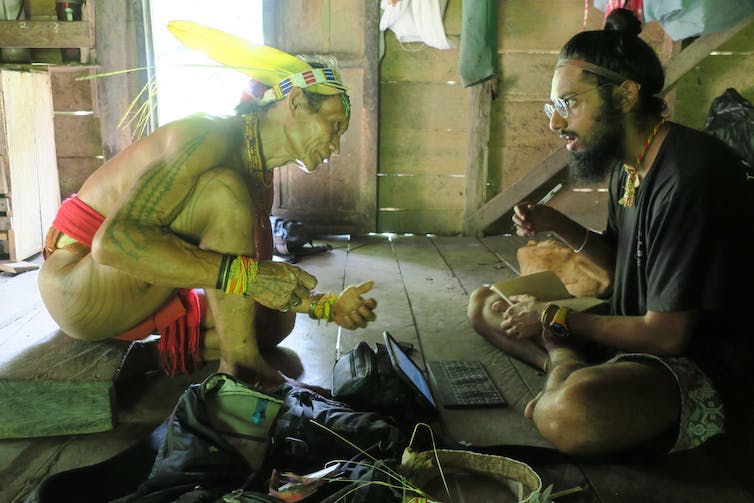 Not only are shamans’ experiences exotic, their very beings are, too. As Aka Manai emphasized to me, people understand shamans to be different kinds of entities, made “other” by their ordeals. The Mentawai word for a non-shaman, simata, also describes uncooked food or unripe fruit; it implies immaturity. The word for shaman, in contrast, means a person who has undergone a process: one who has been kerei’d and come out the other side a sikerei.

This otherness is crucial. Convinced that shamans diverge from normal people, communities accept that they have superhuman abilities. Like Superman’s alien origins and the X-Men’s genetic mutations, shamans’ transformations assure people that they deviate from normal humanness, making their claims of supernatural engagement more believable.

And once people trust that a specialist engages with gods and spirits, they go to them when they need to influence uncertainty. A sick child’s parent or a farmer desperate for rain prefers to nudge the forces responsible for their hardship – and a shaman provides a compelling conduit for doing so.

This, I suggest, is why shamans recur around the world and across time. As specialists compete in markets for magic, they fuel the evolution of practices that hack people’s intuitions about magic and special abilities, convincing the rest of us that they can control uncertainty. Shamans are the culmination of this evolution. They use trance and initiations to transcend humanness, assuring their clients that they can commune with the invisible beings who oversee uncertain events.

Who are the shamans of the industrialized West?

Most people assume that shamanism has disappeared in the industrialized West – that it’s an ancient tradition of long-lost tribes, at most resurrected and corrupted by New Age xenophiles and overeager mystics.

To some extent, these people are right. Far fewer Westerners visit trance-practitioners to heal illness or call rain than people have elsewhere in the world or throughout history. But they’re also wrong. Like people everywhere, contemporary Westerners look to experts to achieve the impossible – to heal incurable illnesses, to forecast unknowable futures – and the experts, in turn, compete among themselves, performing to convince people of their special abilities.

So who are these modern shamans? 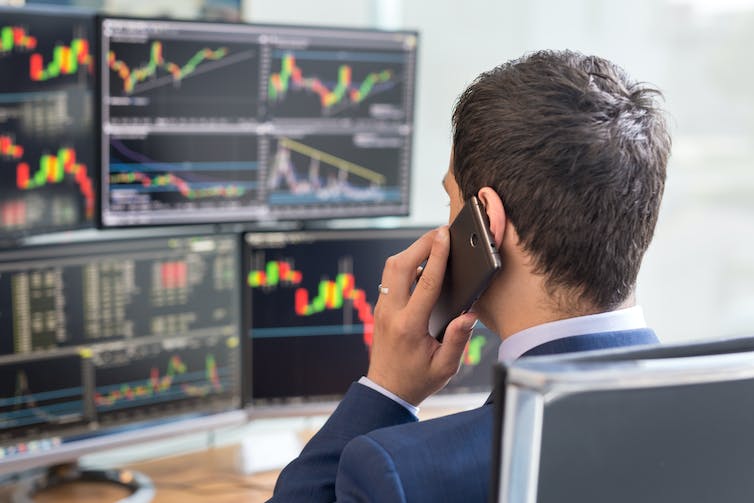 A specialist you can turn to for help divining the mysterious forces at work in financial markets. Matej Kastelic/Shutterstock.com

According to the cognitive scientist Samuel Johnson, financial money managers are likely candidates. Money managers fail to outperform the market – in fact, they even fail to systematically outperform each other – yet customers continue to pay them to divine future stock prices.

This faith might come from a belief of their fundamental otherness. Johnson points out that money managers emphasize their differences from clients, exhibiting extreme charisma and enduring superhuman work schedules. Managers also adorn themselves with advanced mathematical degrees and use complicated statistical models to predict the market. Although money managers don’t enter trance, their degrees and models assure clients that the specialists can peer into otherwise opaque forces.

Of course, money managers aren’t the only experts to specialize in the impossible. Psychics, sports analysts, political pundits, economic forecasters, esoteric healers and even an octopus similarly sate people’s desires to tame the uncertain. Like shamans and money managers, they decorate themselves with badges of credibility – an association with the White House, for example, or a familiarity with ancient Tibetan medicine – that persuade customers of their special abilities.

As long as hidden forces shape our fates, people will try to control them. And as long as it’s profitable, pseudo-experts will compete for desperate clients, dressing in the most credible and compelling costumes. Shamanism is not some arcane tradition restricted to an ancient past or New Age circles. It’s a near-inevitable consequence of our human intuitions about special abilities and our desire to control the uncertain, and elements of it appear everywhere.