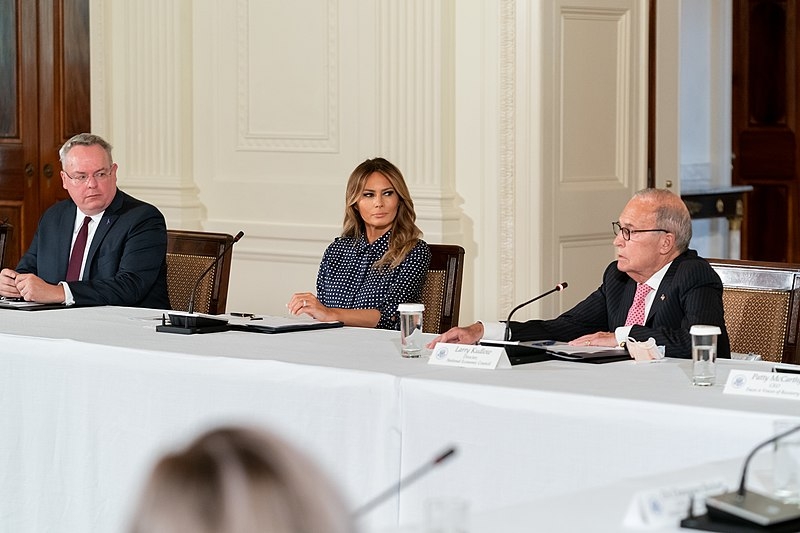 As the first lady, Melania Trump has had to make public addresses at events and recently made her address at the Republican Convention a few weeks ago. But despite having done this since becoming first lady in 2017, a voice expert says there is one aspect in her speeches that she still struggles with.

Voice expert and CEO of communications firm gweek James Bryce analyzed Melania’s speeches and shared that the first lady is reliant on the scripts and the teleprompter when making her speeches. Bryce noted that the reliance on the teleprompter or on the script may have hindered Melania from showing her personality when delivering her speeches, and thus the public watching only has a little grasp on her personality.

However, Bryce explained that Melania’s reliance on scripts or teleprompter may be her way of handling the pressure that comes with being the wife of the president of the United States. “I would suggest that Melania has had some training to allow her to deal with high-pressure situations. For instance, she speaks at a controlled, diligent pace, and sticks to the plan -- leaving little room for error in her delivery,” said Bryce.

Aside from her speech at the Republican Convention, Melania has had to address the public, whether it is to promote her Be Best initiative or through the public service announcements she has made about COVID-19.

Meanwhile, this time marks the beginning of the new school year, and out of safety concerns in the midst of the COVID-19 pandemic, many schools have resorted to doing online or remote learning instead. This is in contrast to the Trump administration’s hopes of fully and physically reopening schools and push for things to go back to normal before the pandemic broke out. Melania recently tweeted about the new school year starting for many children but was met with divided responses.

“Whether you’re going back to school in person or remotely, let’s remember to practice @CDCGov guidelines. Thanks to our teachers & parents for your dedication to the well-being of our children to make this school year a success. #BeBest,” tweeted the first lady.

Melania’s tweet drew a very divided response, with a handful thanking the first lady for her messages and some wanting to lift the mandate on face mask-wearing. Others, however, responded with their criticism of her husband Donald Trump’s administration and once again referenced her infamous ‘I really don’t care, do u?’ jacket.