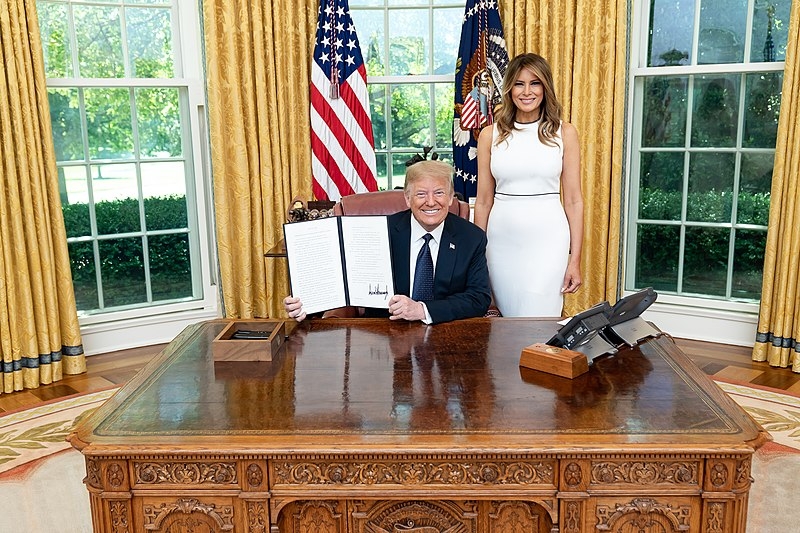 The White House released a statement regarding the signing of the new order, where Mrs. Trump was present alongside vice president Mike Pence. The new executive order, called Strengthening the Child Welfare System for America’s Children, aims to do just that through improving partnerships between state, federal, and community organizations, oversight, and access to resources for caregivers and the youth.

“With more than 400,000 children in foster care, there is a critical need for these children to have safe, stable homes. It is my hope that this Executive Order will provide reforms, which directly improve the child welfare system and further establish this administration’s commitment to the health and safety of children throughout the country,” said Melania.

Previously, Melania’s office criticized a comment made by Food Network personality John Henson on Twitter. Henson questioned her son Barron Trump’s parentage and the tweet also happened to be up during Father’s Day. Controversial television personality Piers Morgan also weighed in on the situation in a piece he wrote for the Daily Mail. Morgan stated that the first lady was right in defending her son from Twitter trolls.

However, he also criticized Melania for not exerting the same effort in preventing her husband’s social media attacks on people he does not like. Morgan cited former congressman Joe Scarborough, whom Trump accused of being involved in his former aide Lori Klausutis’s death. Scarborough has four children, two of them being around Barron Trump’s age.

“What do you think their lives have been like for the past few weeks after the President of the United States publicly accused their father of murdering a young woman?” wrote Morgan.

Klausutis died from an undiagnosed heart condition and fell, hitting her head on the desk. Trump repeatedly accused Scarborough of being involved in her death on Twitter, with Scarborough’s wife and Klausutis’ widower calling for Twitter and its CEO Jack Dorsey, to intervene and take down the accusatory messages.