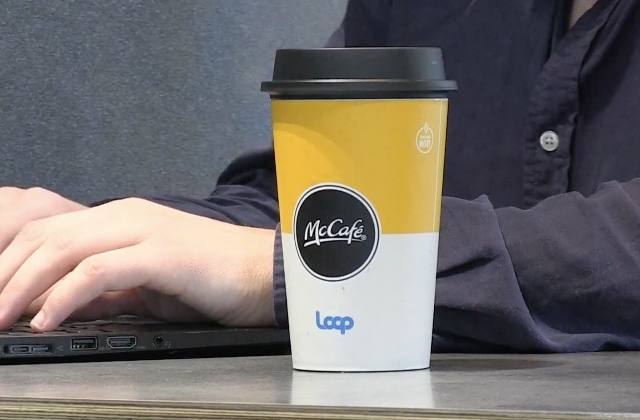 McDonald’s UK starts the trial for its coffee reusable cups where customers can return their cups after use. The fast-food chain implemented the returnable cups system through its partnership with Loop, a global reuse platform.

The American fast-food chain giant is initially rolling out the “rented” coffee cups in the United Kingdom, and they will initially be available in six McDonald’s restaurant outlets. The new reusable scheme is said to be the first in the company, and it will require customers to place a £1 deposit.

For this amount, the customers can prefer to have their hot beverage in the new Loop cup that they can return. Packaging Europe mentioned that under the scheme, those who will opt for the reusable containers will be given a 20 pence discount on their next purchase of a medium hot drink at McDonald’s. Every time that a customer chooses the Loop cup, he or she will continue to receive the 20p off.

The Northamptonshire in the U.K. is where the McDonald’s Loop cup trial is being carried out. Later, based on the results and assessments, the restaurant may roll it out worldwide. The returnable cups are not just available in the store outlets, but they can also be purchased at drive-thrus.

The Sun reported that by going for reusable cups, it will help reduce the number of coffee cups that end up in the UK's landfill. It was said that around 2.5 billion single-use cups are thrown in this landfill each year, and globally, the amount is hundreds of billions.

Apparently, the McDonald’s Loop cups will surely help in lessening the wastes since people can reuse the cups rather than throwing them out after a single-use. It should be noted that customers also get back the £1 deposit for the cups once they return them. The amount is either credited for their next purchase or in cash.

“This way you are renting a cup rather than carrying a reusable cup around all day,” Stephen Clarke, head of communications at TerraCycle Europe and Loop Europe, said. “It is all about convenience.”