Manny Pacquiao fight: Filipino boxer ends training for the fight with Keith Thurman; Legends divided on will be victorious on Saturday 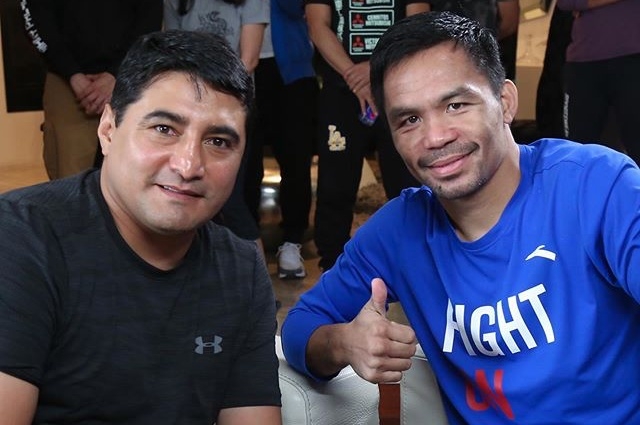 Manny Pacquaio has wrapped up his training in Los Angeles and headed to Las Vegas for his mega-fight with Keith Thurman on July 20 at the MGM Grand Arena. The 40-year-old boxer held his last sparring session at Freddie Roach’s Wild Card Gym and in the afternoon left for the City of Lights.

The big fight is happening this weekend, and as Pacquiao heads to where the fight will take place, his family, friends, and fans are also preparing to fly to the city to show their support. Politicians and celebrities alike are expected to fill the MGM Grand Arena on Saturday night while the world will tune in via cable channels and streaming sites.

According to a report by TJ Manotoc of ABS-CBN, Pacquiao completed four rounds of sparring with Abraham Lopez and the Filipino is very confident in his upcoming showdown against

Keith Thurman. Pacman’s gears like shoes were also put on display at the Wild Card Gym as the team officially close the training for the fight.

With the Manny Pacquiao - Keith Thurman fight just around the corner, the media gathered the opinion of some legendary boxers and surprisingly, they have divided decisions on who they think will win in the match.

Some of those who were interviewed include Sugar Ray Leonard, Lennox Lewis, Roy Jones Jr, and Roberto Duran. The sportsmen revealed their pick in the upcoming WBA Super Welterweight bout.

“I think I’m gonna have to go with Manny Pacquiao because he’s the older, experienced guy,” Inquirer Sports quoted Jones as saying during an interview with Inside PBC Boxing. On the other hand, Leonard revealed that he likes Keith Thurman and predicted him to win because he has the talent, power, and speed needed to knock out his opponent.

Overall, Manny Pacquiao is the favorite pick for most of the betters. Boxing enthusiasts also predicted that Pacman would be able to snatch away Thurman’s super welterweight belt. The Filipino athlete will make another history when he wins on July 20. He will be the lone holder of WBA’s nine-weight division if he can defeat his younger rival.