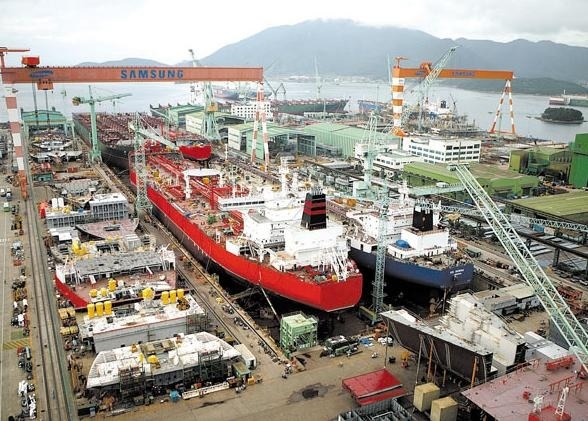 It was the lowest number of new orders since 1996 when the market tracker started compiling data.

According to KB Securities Co. analyst Chung Dong-ik, the sluggish new orders for local shipbuilders were due to a rise in new orders for their Chinese counterparts and a sharp drop for liquefied natural gas carriers, where South Koreans have an edge.

There were only six new orders of LNG carriers globally in the first half, three for the large-sized variety given to the Chinese and other three small and mid-sized LNG carrier types that South Koreans don't build.

The three shipbuilding subsidiaries of Korea Shipbuilding & Offshore Engineering Co. bagged a combined US$2 billion worth of new orders for 33 ships in the first half, down 44 percent from last year's $3.6 billion for 47 vessels.

The new orders were just 11.4 percent of their annual targets of $17.5 billion.

Meanwhile, Samsung Heavy Industries posted new orders worth $500 million for five ships in the first half, dropping by 84.4 percent from the $3.2 billion last year. Its first-half new orders were only 6 percent of its $8.4 billion annual order target.

Daewoo Shipbuilding obtained 20 percent of its annual order target of $7.21 billion during the six months, with just $1.43 billion worth of orders to build six ships, which was down 48 percent from $2.77 billion or 16 ships.