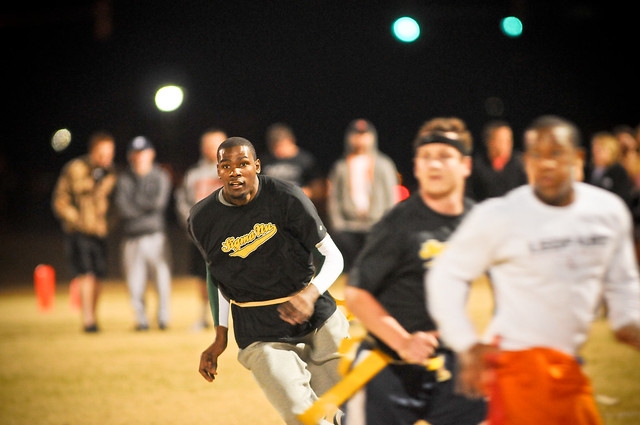 Kevin Durant at Oklahoma State in 2011 | Photo by KT King KT King [licensed under CC BY 2.0 (https://creativecommons.org/licenses/by/2.0)] via Flickr.com

Kevin Durant has confirmed that he suffered from a ruptured Achilles and has since undergone surgery after leaving the NBA Finals Game 5 much earlier than he wanted. Unfortunately, this kind of injury usually calls for half to a full year of rehabilitation that ultimately means he can no longer participate in Game 6 on Thursday.

After his month-long rest from a calf injury, Durant returned to the court on Monday in the hopes of leading the Warriors to remain in the running for the NBA championship win. He was able to play for over 11 minutes and scored 11 points and 2 rebounds before the Achilles injury happened at the start of the second quarter.

Durant immediately flew to New York for an MRI and for the surgery. While his team had already predicted the Achilles injury at post-Game 5 press conference, Durant confirmed it with an Instagram post. “I wanted to update you all: I did rupture my Achilles. Surgery was today and it was a success,” wrote on a social media post on Wednesday afternoon.

The two-time Finals MVP also confirmed though it is already quite obvious, that he will not be able to return for Game 6. On a good note, the player appears to have a positive outlook as he possibly heads to the free agency this offseason. “My road back starts now! I got my family and my loved ones by my side and we truly appreciate all the messages and support people have sent our way,” Durant added.

Raptors fans cheered on as the biggest threat from the Warriors was being escorted out of the court. So it was like a poetic justice when Durant’s team forced a Game 6, though barely, 106-105. The next game happens on Thursday, June 13, at 9 p.m. ET. The upcoming game is made extra meaningful by the fact that this is going to be the last NBA game Warriors will be hosting in Oracle Arena as they make the move to the Chase Center in NBA season 2019-20.