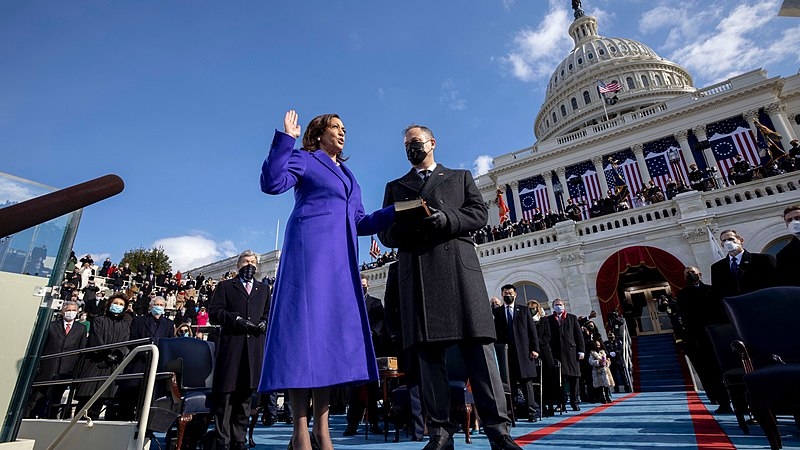 Kamala Harris broke ground in so many aspects of US history when she was sworn in as the 49th Vice President of the United States. The former California Senator was then honored by NBA’s Golden State Warriors in a special tribute to her victory.

The Warriors paid tribute to Harris by wearing Oakland jerseys during their game against the San Antonio Spurs on Wednesday. The team was initially based in Oakland before they relocated to San Francisco. The team’s official account also shared a video tribute that features Stephen Curry signing a special jersey for Harris, which the vice president was shown to have received. Harris made history as the first woman, the first Black, and the first Asian-American to become vice president and hails from Oakland, California.

“We’re taking great pride in the fact that Kamala Harris is from Oakland and was inaugurated today as Vice President, just a huge day obviously in our nation’s history and for the Bay Area as well,” said Golden State Warriors Coach Steve Kerr prior to the game. “President Biden has a big job on his hands. The big one really is trying to settle the country down and settle a lot of this anger down and hopefully unify people. There’s a lot of work to be done but it’s not just him. It’s everybody, everybody’s responsibility to treat each other well with empathy and respect and civility.”

A few other NBA coaches also made public reflections on the inauguration. Spurs coach Gregg Popovich expressed optimism in Joe Biden and Harris’s ability to make the country better. Philadelphia 76ers coach Doc Rivers reflected on the importance of voting that the inauguration resulted from.

Harris’s relatives have also celebrated her victory and inauguration all the way in India and in the Caribbean. Her maternal uncle Balachandran Gopalan said that he was happy to hear his niece mention her mother, cancer researcher Shyamala Gopalan Harris, often in her speeches. Gopalan added that he would like to fly to Washington to see Harris and congratulate her in person once it was safe.