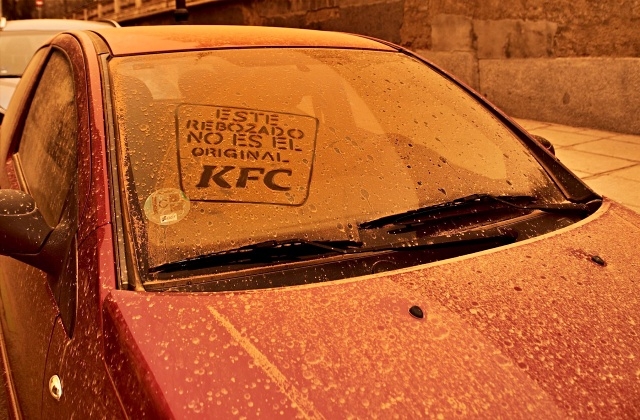 KFC Spain has come up with a creative way to promote its brand, and the campaign has been a big hit. The fried chicken fast-food chain used the Saharan desert storm dust that has affected the country in its latest marketing promo, and it turned out to be a huge success.

KFC Spain said that its campaign drew more than 1,000 responses from the public, and people who participated were rewarded with free food that were claimed from the restaurant's drive-thrus.

The Saharan dust cloud has been affecting many parts of Europe in recent days. Residents see their homes, vehicles, and streets covered in orange dust, and one of the countries experiencing this is Spain. The sand dust from the desert literally covered and turned everything orange, including the sky.

With the situation, KFC Spain and its creative agency partner, PS21, came up with a creative way of using the Saharan dust to their advantage. The company immediately launched its real-time marketing campaign where the residents' private cars became KFC's own advertising channel.

KFC Spain posted a tweet urging social media users to write "KFC" on their dust-covered cars then drop by any of its drive-thrus in the country. The brand added that it would be giving away free chicken strips to those who will participate.

"Let's do one thing: if you stop by any KFC Auto with a 'breaded' car and the letters KFC painted with your finger, we will give you two chicken strips with our real breading," KFC Spain tweeted. "This is not a joke and our restaurants were already notified."

As per AdWeek, within 24 hours after KFC Spain launched the campaign via social media, the fast-food giant was able to generate five million impressions and 300,000 interactions on Twitter.

With the overwhelming response, KFC has been giving away free chicken to people with "orange" cars featuring its iconic logo. It was said that more than 1,000 people have claimed their free food in the company's 76 drive-thru outlets in Spain.

"At PS21 we are always committed to real campaigns that seek consumer participation and that are culturally relevant," PS21's account director Sergio Hernández, said in a press release. "In this case, combining intuition, creativity, and responsiveness, we went a step further in the application of our 'Always In' strategy by taking it to the real world and breaking the Twitter barrier to take our message to the streets."