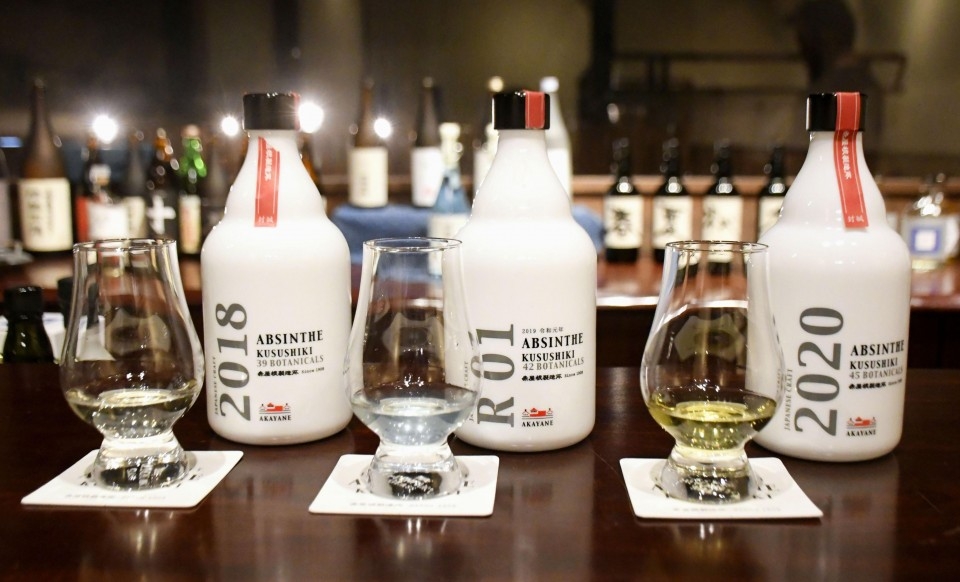 Japan's shochu distilled liquor, long-established breweries have started to branch out into the Western spirits of absinthe and gin, making use of the rich variety of local fruits, herbs and other potential ingredients

Kyushu's long-established breweries have started creating Western spirits of absinthe and gin to make use of the island's rich variety of local fruits, herbs, and other potential ingredients.

In creating absinthe, an aniseed-flavored drink that uses wormwood as the main ingredient, the Sata Souji Shoten brewery uses sweet-potato shochu as the base with over 40 botanicals including Japanese "ume" apricots, Sakurajima tangerines, and kelp.

As aniseed is a traditional medicinal herb, Sata Souji's absinthe carries the name "Absinthe Kusushiki," with "Kusushiki" based on Japanese words for "medicine" and "mysterious."

Part of what makes the drink mysterious is the way it instantly turns milky white.

The craft gin, which is made by further distilling the company's Yamaneko shochu made from sweet potatoes, is infused with local farm botanicals such as kumquat and "hyuganatsu" citrus fruit as well as shiitake mushrooms.

The fragrant gin can be enjoyed by mixing carbonated water.

The main concern of Shinsaku Kuroki, 33, the fifth-generation head of the distillery was finding which plants to use.

Kuroki imports some ingredients for gin production, such as juniper berries, while using local produce and those that he attempts to grow on the company farm.

The distillery in the town of Kijo in Miyazaki Prefecture is surrounded by forest.

It took time for sweet potatoes to become a main ingredient for shochu after it was introduced to Japan, while the usage for the types of "koji" mold also changed through time.