Home birth may start babies off with health-promoting microbes 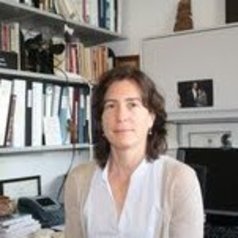 For all of human history, babies have been born where their mothers lived – whether in a house, hut or cave. Only in the last century has birth moved out of the home and into the hospital. How has that changed the types of microbes that live in and on our bodies – collectively known as the microbiome – which we know are vital to human health?

To find out, our group of researchers from New York University, University of California San Francisco and Sejong University in Seoul, South Korea compared different kinds of fecal bacteria from babies born at home to babies born in the hospital. Our results suggest that hospital births can change the gut microbiome of newborns, perhaps placing these babies at higher risk for certain immune or metabolic disorders. So how do we respond? And why do I, as a hospital-based midwife, care?

Starting with the midwife part: There is a bas relief at Angkor Wat in Cambodia that depicts a woman giving birth. She is supported from behind, a midwife kneels in front and a newborn lies across her chest. It looks just like many midwife-attended births today, despite the fact it comes from halfway around the world and is 800 years old.

I like to think about what it means to do the same work that midwives did centuries ago. Whether by necessity (then) or by choice (now), the midwives’ philosophy of care is pretty much the same. Namely, to support an undisturbed birth – where interventions are used only when absolutely necessary. Increasingly, research suggests this is a good approach to care. 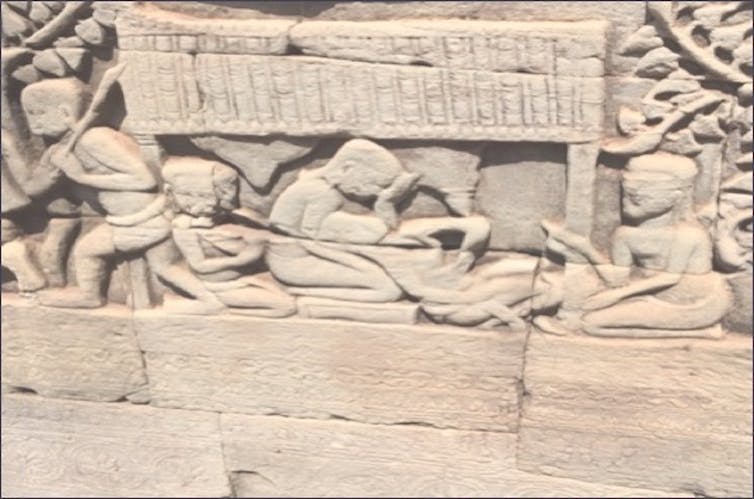 A bas relief on a temple at Angkor Wat shows a woman giving birth with the help of a midwife. Robin Hayes, CC BY-SA

In the last decade, researchers have discovered many ways our health depends on the trillions of bacteria and other microorganisms that reside in and on our bodies. Exposure to vaginal bacteria at birth starts an important colonization process in the newborn. In the beginning, bacterial colonies on different parts of babies’ bodies are similar and tend to match their mothers. Over time, different body habitats, like the skin, mouth and gut, develop their own distinct microbial communities.

The baby’s intestinal microbiome plays a key role in initiating immune and metabolic function. That is why we wanted to investigate how hospital factors might shape the early gut microbiome. We compared feces from healthy, breastfed babies who were born vaginally at home to similar babies born in the hospital. Then we determined which microbes were most likely to flourish in which babies during the first month of life.

Here is what we found: Babies born at home were more likely to be colonized with “beneficial” microbes, the kinds associated with normal immune, metabolic and digestive functioning. Babies born in the hospital were more likely to be colonized with microbes associated with interventions like cesarean section, antibiotic treatment and formula feeding even though none of those things happened to the babies in our study.

Then we wanted to see if these differences in the microbiome made epithelial cells – which line the colon – behave differently.

So we exposed these epithelial cells to fecal material – which contains a sample of the baby’s microbiome. We found that cells exposed to material from hospital-born babies were more likely to show an inflammatory response when the baby was one month old. While inflammation is an important defense mechanism, chronic inflammation at the cellular level can also contribute to inflammatory diseases later in life.

To be clear, we observed this only in the lab, not in a living baby, so we can’t speculate on the significance of this finding for the long-term health and well-being of babies.

Research suggests that babies benefit from undisturbed exposure to their mother’s bacteria, including vaginal and fecal bacteria at birth, then ongoing exposure to the mother’s milk and skin bacteria while breastfeeding during the first year. Disruptions in early mother-to-baby transmission are associated with changes in the infant microbiome which, in turn, have been associated with health problems later in life. Thus, supporting an undisturbed birth process makes sense.

But, undisturbed birth isn’t always possible. Complications arise, and microbiome-altering interventions – like antibiotics or cesarean section – can save a mother or baby from life-threatening emergencies. These interventions may impact the baby’s microbiome, but no one would recommend any other course of care.

However, what about interventions performed without medical necessity? For example, one in three babies in the U.S. is delivered by cesarean section. That’s around double the rate we would expect if responding to medical need alone. Women in the U.S. frequently experience many interventions while giving birth. Too much intervention used too soon doesn’t help, and in many cases may harm, mothers, babies and their microbiomes.

The mothers of the babies in our study did not experience overt interventions at birth. All mothers who had antibiotics, a cesarean delivery or a water birth were left out. That meant our study was small, only 10 babies in the hospital and 10 babies at home. Yet a large study of over 1,000 babies came to the same conclusion: full-term, breast-fed babies born vaginally at home had the most “beneficial” microbiomes. That is, they were colonized with microbes that have been associated with normal health and development. Further research is needed to understand the implications, but thinking through a typical hospital birth may suggest areas to study further. 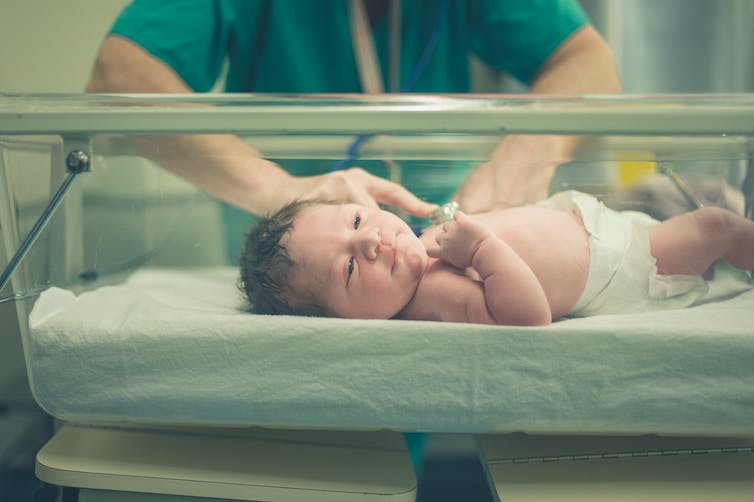 Birth in the hospital: Too clean?

One reason hospital births differ from those at home is that hospitals prioritize cleanliness. Hand washing, bactericidal scrub and frequent cleaning limit the spread of germs. As the baby nears delivery, a sterile drape may be placed underneath the woman and sometimes over her legs and abdomen to create a “sterile field” around the baby.

In some hospitals a bactericidal soap may be used to wash the vagina before delivery, destroying almost all the bacteria. This practice reflects just how little we value the robust microbial habitat of the mother’s vagina which, interestingly enough, changes during pregnancy to promote an abundance of healthy flora. There may also be frequent vaginal exams performed during labor that carry small amounts of antiseptic lubricant into the vagina.

After birth, the baby may be taken to a semi-sterile warmer instead of having contact with the mother’s skin. Antibiotic ointment is usually applied to the baby’s eyes. A full-body bath to “clean” the baby is also common, constituting another source of potential damage to microbial colonies on the newborn’s body.

But even for babies who “room in,” contact with the outside world is limited compared to home where a baby might get licked by the family dog or passed around to an array of visitors. The “hygiene hypothesis” suggests that we, as humans, need early and frequent exposure to diverse organisms. We tend to restrict this in the first few days of life in the hospital. Is that the right approach?

In the U.S. only 1% of births occur at home. Our research suggests a previously unrecognized benefit of home birth. Might this information also lead to a redesign of hospital care? When we start to value the power of babies’ first inheritance – bacteria from their moms – we may end up with a different view of what “best practice” really is.