FxWirePro: Vols & Risk Reversals Perspectives for AUD Ahead of RBA 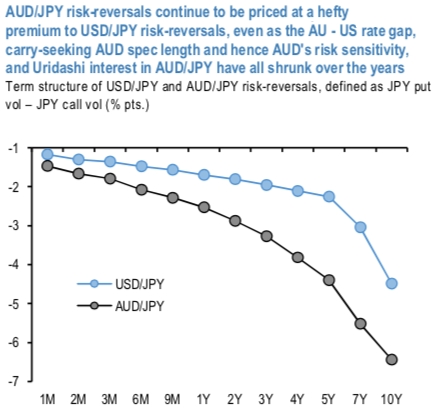 The AUD, as a proxy for global risk sentiment, will continue to be buffeted by coronavirus concerns. For Aussie, this week, the major data event has been RBA monetary policy in addition to Aussie trade balance and US unemployment & non-farm data.

Well, we expect two further RBA rate cuts, in April and August, taking the cash target to 0.25%, followed by a small but open-ended ACGB purchase program.

Amid such data events, AUDJPY risk-reversals continue to be priced at a sizeable premium to USDJPY across expiries, most notably in longer maturities (2Y - 10Y, refer above chart). AUDJPY 5Y riskies for instance trade at a 0.8v premium (for JPY calls) over the arithmetic sum of 5Y AUDUSD and USDJPY riskies, which is not an unusual historical occurrence by any stretch but nonetheless suggests a lingering fear of GFC-like non-linearity/discontinuity in the behavior of the underlying spot. We are not convinced that this premium is justified for a number of reasons:

First, from a volatility perspective, AUD has become a pale shadow of the über-risk sensitive asset it once was as structural economic changes in particular, the end of the Australian mining boom and its effects on debt-servicing capacity of strained household balance sheets have ushered in idiosyncratic economic weakness and loosened AUD’s link to the global cycle. RBA’s counter-cyclical response to the growth slowdown of taking the cash rate down to all-time lows and thereby eliminating the traditionally high and positive AU - US yield gap has reinforced the decline in AUD’s risk beta, as carry-seeking speculative long positions have not only disappeared but in fact flipped short in anticipation secular economic weakness.

The result is that GFC era boom-bust cycles of re-and de-leveraging of AUD longs are now history, and it is no longer unimaginable that bouts of risk-aversion could one day squeeze AUD higher should the initial condition going into such shocks be a large stock of short AUD positions. Courtesy: JPM