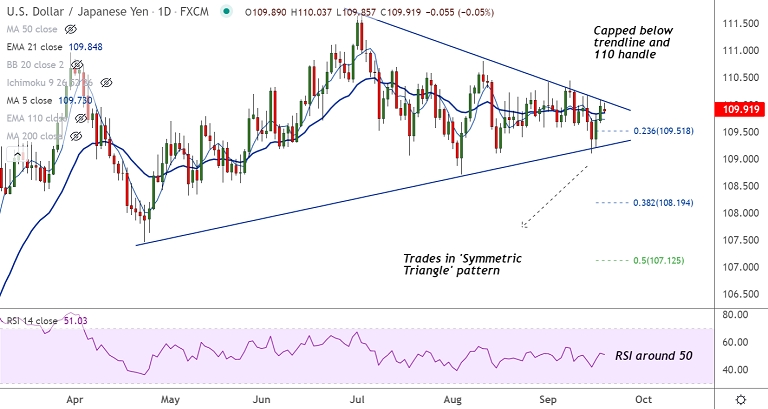 - Oscillators are in neutral territory

- RSI is flat around the 50 mark, while Stochs are biased higher

- Volatility is low on the daily charts, Bollinger bands are narrow

The dollar scaled three-week peaks on Friday, but is struggling to hold gains in the early Asian session today.

Better-than-forecast U.S. retail sales data released on Thursday backed expectations for a reduction of asset purchases by the Federal Reserve before the end of the year.

Data on Friday showed University of Michigan consumer sentiment for September inched higher to 71 versus the final August reading of 70.3.

However, rise in the University of Michigan consumer sentiment was much less when compared to the improvements seen in the Empire States and Philadelphia Fed manufacturing surveys.

Investors now wait for the latest FOMC monetary policy decision on Wednesday for clues on the asset tapering and interest rate hike timelines.

The central bank is expected to open discussions on reducing its monthly bond purchases, while tying any actual change to U.S. job growth in September and beyond.

The pair continues trade in 'Symmetric Triangle' pattern and break out will provide a clear direction bias.