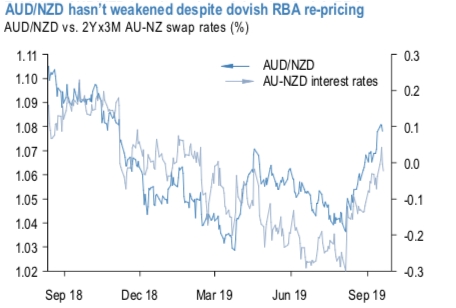 The RBNZ has maintained the 'status-quo' in its monetary policy today. Kiwis central left the OCR unchanged at 1.0% at today's OCR Review as widely anticipated. The press release suggested that the RBNZ does not currently see a need to cut the OCR further. The overall assessment was that the outlook for monetary policy "has not changed significantly" since the August MPS. The RBNZ seems to be saying that its actions to date are sufficient. It noted that the OCR cuts to date have led to lower lending rates and a lower exchange rate; and, it expected low-interest rates to generate a pickup in domestic demand over the coming year.

We have remained short Antipodeans (both AUD and NZD) despite a lack of near-term local catalysts. We continue to maintain these recommendations but also increase AUD shorts via a bearish AUDJPY put spread this week. The primary motivation to increase AUD shorts is a shift in the RBA stance which indicated that the bar to cut rates has been lowered. At the recent minutes, the RBA made several surprising changes, which include conspicuously dropping the language around needing “additional evidence” to justify further cuts.

Quite a few economists perceive this as lowering the hurdle to easing policy further, and suggests less degree of patience from the Bank. The RBA has also increasingly acknowledged the influence from the global factors – both lower rates and global risks – as determining factors in the policy outlook. Taken all together, our economists have moved forward their expected 50bps of hikes remaining to October and February, from February and May previously.

The preferred way to increase AUD shorts is vs JPY as it would have the added benefit of being a hedge to US-China trade talks.

Given the lack of visibility on US-China trade talks and stabilizing data in the interim, we think that such a hedge is best positioned for via limited downside options (in this case a 3m put spread). We part finance this by selling AUDNZD topside as the cross is largely unchanged despite narrower differentials and growing expectations of RBA rate cut (refer above chart).